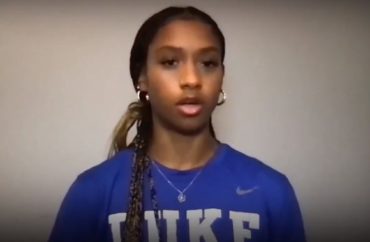 Brigham Young University banned a non-student fan from future games after a Duke University volleyball player alleged that she was the victim of frequent racial taunts. Her godmother alleged that someone kept yelling the “N-word” every time she went to serve.

But there is no public video of the incident and neither Duke nor BYU has returned requests for comment from The College Fix for copies of what university officials reviewed before making statements on the controversy.

The best the university could do after spending “hours” looking at footage is identify someone who BYU officials “believed [was] uttering the slurs and exhibiting problematic behaviors.”

Rachel Richardson wrote on Twitter that “my fellow African American teammates and I were targeted and racially heckled throughout the entirety of the match,” on Friday against BYU.

“The slurs and comments grew into threats which caused us to feel unsafe,” Richardson wrote. “Both the officials and BYU coaching staff were made aware of the incident during the game, but failed to take the necessary steps to stop the unacceptable behavior and create a safe environment,” she claimed.

That claim does not fit with what her godmother claimed.

Rachel Richardson of @dukeVB shares what happened at BYU this weekend and how she is moving forward with love and compassion while advocating for change. @rachrich03 pic.twitter.com/Lw3tWQ7yrt

Her godmother, a candidate for judicial office in Texas, made different claims.

“My Goddaughter is the only black starter for Dukes volleyball team. While playing yesterday, she was called a [N-word] every time she served,” Lesa Pamplin tweeted. “She was threatened by a white male that told her to watch her back going to the team bus. A police officer had to be put by their bench.”

Her Twitter account has since been made private. She did not respond to an email sent to her law firm address on Monday morning that asked if it was one or more people that yelled the racial slur, since volleyball teams switch sides after each set. The Fix also asked if she was at the game and could share video of the incident.

Richardson served a total of seven times during the march, according to the play-by-play from Duke as well as a College Fix analysis of the video. Three of Richardson’s seven serves cannot be seen on the BYU version of the match.

The Fix also asked BYU officials if there were multiple culprits, if the godmother is not telling the truth or if the contention is that this person who is now banned switched from fan sections during each set to be behind the teams, since volleyball teams change sides after each set.

Here is what we are apparently supposed to believe about what happened in the racist BYU/Duke volleyball incident:

A white man repeatedly used a racial slur (possibly the N-word) to heckle a black Duke player and threatened her in front of a large crowd.

University officials also condemned the alleged act of racism. “I am outraged by the racist slurs and taunts directed at members of our volleyball team at BYU this weekend,” President Vincent Price stated. “Duke is fully committed to providing a safe, inclusive environment for competition, and we will not tolerate any racism or harassment of our student-athletes, coaches, staff, or fans.” Officials moved the game on Saturday to a different location out of fear for the team, according to a statement from the North Carolina university.

BYU released a statement saying it had “banned a fan who was identified by Duke” from all of the Mormon university’s athletic venues. The fan was in the student section but is not an enrollee at the university.

A second statement called into question the account of Richardson’s godmother.

“Following last night’s volleyball game, we spent hours reviewing video of the event, speaking with our event management and security staffs to try and figure out what exactly occurred and how it might’ve happened. This behavior cannot be acceptable. To any of us,” the university stated.

“When last night’s behavior was initially reported by Duke, there was no individual pointed out and despite BYU security and event management’s efforts, they were not able to identify a perpetrator of racial slurs,” the university stated. “It wasn’t until after the game that an individual was identified by Duke who they believed were uttering the slurs and exhibiting problematic behaviors. That is the individual who has been banned.”

Editor’s note: Additional reporting on this story can be found here.