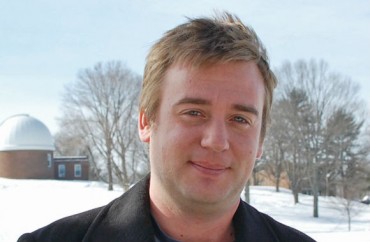 A disease is spreading rapidly across college campuses nationwide.

The president has talked about it, comedians have been intimidated by it, and an enormous driver of economic growth is being plagued by it.  It is a pernicious, viral presence.

To my surprise, I learned last week that Wesleyan University is ground zero for the latest Social Justice Warrior (SJW) outbreak.

And I ran right smack dab into it, by daring to share my informed opinion about the Black Lives Matter movement as a columnist for the Wesleyan Argus.

After a week of students stealing newspapers with my column, online and in-person hate directed toward me, and pressure to stay silent from students, I’m still struggling to comprehend what hit me.

Was I wrong about Wesleyan the whole time?

In my debut article for The College Fix, about coming to Wesleyan as a two-tour veteran of the Iraq war, I explained how surprised I was that my politically progressive liberal arts school seemed a cut above the rest.

That’s because its students can recognize the college bubble and make attempts to break through it.

A year on campus penning Argus columns against Wesleyan liberal groupthink had taught me that disagreement could be passionate and yet respectful. I thought that Wesleyan had somehow remained untainted by SJWs.

Such people engage in hostile and over-the-top diatribes about issues such as sexual assault, feminism, veganism/animal rights, racial issues and far-left politics.

They humorlessly attempt to silence anyone who dares to challenge them, in an effort to culturally terraform the spaces around them to comply with their narrow worldview.

Lo and behold, my first column of the academic year awoke these dormant infectees at Wesleyan.

After a summer glued to coverage of black people dying at the hands of police, I’m not quite settled in my views of the Black Lives Matter movement.

I’m horrified by both the Charleston church massacre and the seven police officers who died in the line of duty – two of them execution-style – the week before classes started.

RELATED: What it’s like to be a veteran at one of the most liberal colleges in the country

But there’s also video of Black Lives Matter supporters cheering after hearing about the death of a police officer, chanting “pigs in a blanket, fry em like bacon.”

The violent rhetoric associated with some in the movement, the destruction of Baltimore, the attacks on small business and personal property – I asked myself, “is this the best way, the most productive way, to enact the changes that are needed?”

I want Black Lives Matter to succeed by incorporating a strong message of peace, not continuing down a radical path that is existentially opposed to police. And I wanted feedback to my column to gauge whether I needed to re-evaluate my own beliefs.

A day later, when I awoke from a nap, my phone had melted down and all hell had broken loose.

The Wesleyan feed for the anonymous social media app Yik Yak was flooded with messages of both hate and support for my column, and for me personally. Some commenters said they were stealing copies of the Argus and trashing them.

I polled the editors for how many copies were stolen. They estimated half of that print run of 1,000 copies. Some said they saw newspapers being burned or shredded.

The online comments on my Argus column made my jaw drop. I was called a racist and trash. Some said my article was so offensive that it shouldn’t have been published. Nevertheless I engaged with some critics in the comments.

Hostility toward me hasn’t been limited to cyberspace. People whispered “racist” or other pleasantries under their breath when I passed. In a cafe, an activist berated me in public for 15 minutes.

According to one commenter on my column, my picture is being posted online with comments that “seem to be calling for violence” against me.

While I received private words of support from students and alumni, some SJWs took their crusade to the Argus offices.

Members of the “people of color” campus publication, The Ankh, screamed at the editors and demanded that the entire next issue be one huge apology.

The editors in chief responded by promising to institute a process to fact-check “questionable” statements before opinion pieces are published. They said my column “cites inaccurate statistics and twists facts,” but haven’t given me an explanation of what was incorrect. I wasn’t given a chance to respond before the editors published their apology.

The editors-in-chief also pledged to make a “Black Out” issue of the Argus “in the near future,” written entirely by students of color.

Planning for our Black Out issue begins in Usdan 108 at 5. We invite writers, artists, and thinkers to continue the conversation.

They texted me to say that I shouldn’t be fired, “but we do want to figure out a way to ease the controversy of having you stay on our staff.”

A pawn in a larger battle

This kerfuffle is a symptom of a larger problem at Wesleyan: repeated attempts to bully the Argus into serving as a vehicle for political correctness.

Even Sunday’s student government meeting featured a debate on fully defunding the paper in response to my column, according to the minutes, despite the Argus having only two paid positions to start with.

Kate Cullen, the president of the student government, told me there’s been longstanding tensions between campus activists and the paper. In other words, the Argus is the next target for cultural terraforming, under which opinions like mine would not be published and anyone who dared to criticize the hivemind would be berated, intimidated and silenced.

Unsurprisingly, Cullen said the executive committee would be pleased if I step down as an elected representative. Another member of student government contacted me Monday night, telling me I’m welcome to stay – but he hasn’t said it publicly.

At this point, I don’t exactly want to keep my seat if the paper is going to be jerked around every time an article offends someone.

Support from the grown-ups isn’t enough

The only bright spot in this dark week has been the Wesleyan administration and faculty, who have been firmly on my side.

President Michael Roth, Provost Joyce Jacobsen and Vice President for Equity and Inclusion Antonio Farias wrote a message in support of my right to publish dissenting opinions, particularly reminding students “there is no right to not be offended.”

They wrote: “Censorship diminishes true diversity of thinking; vigorous debate enlivens and instructs.” The chair of the classical studies department posted a comment expressing his “full agreement,” while a student bizarrely claimed that my column “actively silences other speech.” While the administration did call me in to explain the hubbub around my column, I don’t think it’s because they want me to shut up. On the contrary, President Roth has a strong reputation for supporting free speech, according to several faculty and administrators whose word I trust.

Having grown-ups in my corner doesn’t put me at ease, though. Most students either don’t care or are too scared to speak out in support of my right to express my views against the bile and threats from a minority of SJWs.

Cultural terraforming is coming to your campus

Despite Wesleyan’s scandals in the past year – the drug poisonings from the winter, the sexual-assault allegations and the issues with fraternities – I still, perhaps naively, believed that Wesleyan was a cut above the rest when it came to discussing difficult subjects.

That it was still possible to have an exchange of ideas between liberals and vastly outnumbered conservatives.

My hopes have been dashed. It’s clear that the reasonable majority won’t respond to the determined mendacity of the SJWs.

Your campus might be next. Administrators are confounded by this attempted cultural terraforming, which poisons the free exchange of ideas and destroys the mission of liberal arts colleges.

All that remains in me is a small faith that campuses can fight back, even though it will get worse before it gets better.