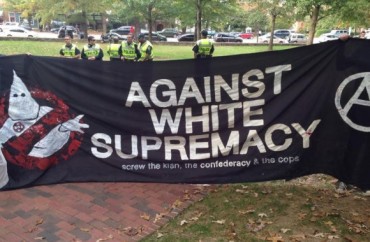 A Confederate war memorial that outlived the student protest group that tried to get it removed from campus has been targeted with graffiti for the fourth time in two years.

“Love is understanding why others hate. Love [is greater than] Hate. BLM,” a vandal had written in black paint on the University of North Carolina-Chapel Hill monument, known as “Silent Sam,” when a Daily Tar Heel photographer found it Friday.

Though no one has taken credit for the Black Lives Matter-themed vandalism, a former member of the anti-statue Real Silent Sam Coalition, which is now defunct, praised the vandalism as an “effective” form of protest at a time when UNC activists worry that turnover and fatigue are killing their cause.

After the monument to UNC alumni who fought for the South in the Civil War was first targeted with graffiti in July 2015, the university installed $3,600 security cameras.

The university then declared security footage unusable after a vandal attacked it a month later, spray-painting a reference to the disputed suicide of Sandra Bland, a black woman, in a Texas jail.

UNC opted not to investigate a third incident where someone blindfolded the statue because it wasn’t a criminal act, but it did make an arrest for the next graffiti attack in 2016, a spokesperson for campus safety told The College Fix.

This latest vandalism is under investigation, he said in an email Tuesday.

“I can confirm that there are indeed security cameras which provide surveillance footage of that area,” and the university is “encouraging members of the campus community to provide any information which might aid in the investigation.”

A police report obtained by The Fix assessed the damage to the statue at $750. Maintenance staff cleaned away Friday’s graffiti over the weekend, according to The Tar Heel.

‘We have to get creative’ so administrators pay attention to us

Local politics has taken a backseat to organizing national resistance to Donald Trump’s presidency, according to activists associated with the defunct anti-statue coalition.

Public resentment toward historical Confederate symbols peaked around June 2015, when activist Bree Newsome scaled a flagpole to steal a Confederate battle flag from the grounds of the South Carolina State House.

Current student activists seem to be less interested in a confrontational approach than their slightly older peers.

“After protesting so much and seeing nothing happen, I think we start to realize that we have to get creative,” Dominique Brodie, a sophomore and student activist, told the campus newspaper. “We have to find other ways to get the attention of administrators and other authority figures.”

That means changes to the way students protest, #RESIST and get woke on campus, activists say.

No more weekly rallies in front of the administrative building. More Change.org petitions and “artivism,” including poetry and “rapping for activism,” Brodie said.

As for the Real Silent Sam Coalition, it’s been dark on Twitter since July, when it retweeted another group’s event. Its last original tweet comes from a December 2015 faculty protest against UNC President Margaret Spellings, a former secretary of education.

Faculty from across the system were kicked out of the meeting after disruption! #WeDemandUNC #FireSpellings pic.twitter.com/9dmjJmMfJD

Activists who seemed to crave confrontations with police in recent years are now afraid of getting their hands dirty.

“In the past, there’s been this idea that if you don’t want to go and march through the street and scream — and possibly be arrested or brutalized by the police — then you can’t contribute,” said Brodie, the UNC sophomore.

‘Physical acts’ are better than petitions

The change in tactics has veteran activists worrying whether their movement is in capable hands. June Beshea, a 2016 UNC graduate and a former student activist affiliated with the Real Silent Sam Coalition, who uses “they” pronouns, said they want “physical acts” to remain a part of the campus activist arsenal.

“I don’t think anything is going to get done unless you take it to the streets, honestly,” Beshea told The Tar Heel.

“The most effective way to get people behind a movement is through physical acts,” they said, specifically approving of “vandalism or blocking streets or whatever it is.”

The problem with petitions is their effectiveness depends on “trust in that system” to see them as “valid,” and “a lot of the issues we have aren’t even seen as valid” by the UNC administration, Beshea added.

Yet even Beshea has favored soft, nonconfrontational forms of protest in the past. She organized a campus vigil for Sandra Bland, a week after the second Silent Sam vandalism, that featured nonwhite poets talking about “feeling unsafe.”

Brodie did not respond immediately to an email from The Fix asking if he supported or was involved in the most recent vandalism of Silent Sam.

Beshea encourages more vandalism like that seen Friday but did not say who might be responsible for the Silent Sam defacement, in a Twitter message to The Fix Wednesday morning.

They said Silent Sam “lording over any other monument on campus” shows UNC’s fundamental commitment to the supposed “lost but glorious cause,” the Confederacy, in a Monday editorial.

“Celebrating this monument ignores the people of color who built this University and have contributed to the community from the beginning,” the editorial reads. “Let’s not act like the erasure of Black voices on this campus only happened 150 years ago.”

EDITORIAL: There's nothing to glorify about the old South or Confederacy that tried to defend a legacy of oppression https://t.co/2Jl5PBycVA pic.twitter.com/ZarxEpgj4w

UPDATE: Beshea, the 2016 UNC graduate, responded to a Fix query after this article was published. The student’s comments have been added.