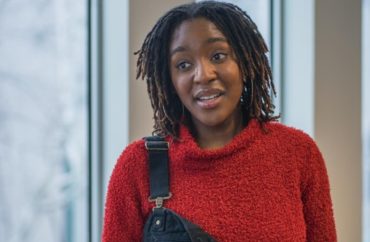 A student at Oberlin College recently wrote an anti-white opinion piece that examines why she believes Caucasians do not like rap.

“If there’s one thing white people hate, it’s competition,” The Oberlin Review opinion editor Angel Aduwo (pictured) wrote in a February 25 editorial. “If we consider rap music to be music, then we must question the validity of the claim that classical music and other Eurocentric art forms are superior.”

“Just about every African-American music style, from jazz to blues to hip-hop, has been criticized and politicized by white American society,” Aduwo explains.

“These critiques were often rooted in racism and a distaste for Black American expression, rather than any real discourse on the music itself,” she said.

She cited another student who said the term “jazz” is racist because it comes from “jackass.” More likely it comes from the word “jasm” which means “energy” or “vitality.”

Aduwo’s source for the dubious etymological claim, Inayah Raheem, said that many white people struggle to “think outside of the box” and that’s why they do not like rap.

“In my opinion, a lot of white people have the inability to think outside of the box of what they have considered music,” Raheem said. “It’s [a] very common notion in Conservatory settings and classical music settings. I think people have created this strict kind of structure in their mind and they think that anything that goes outside of that can’t be considered music.”

White people cannot win if they “disregard” rap or if they do listen to the music, according to Aduwo.

It’s all about “a lack of respect for African-American culture” Aduwo explains to her readers.

“This is due to the fact that white people, but also non-Black people in general, don’t want to see African Americans as having their own distinct culture,” she explains.