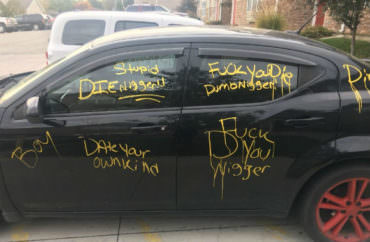 Racism is still ubiquitous, though

The group released a shocking statement late Monday demanding that criminal charges be filed against Dauntarius Williams for his supposed “Halloween prank,” saying it was “appalled, disgusted and hurt” by his actions, which constitute “hate speech” regardless of his race:

The fact that an African American man committed this act should not undermine its effect on K-State students. The conduct of Mr. Williams does not negate the current racist and discriminatory actions that continue to occur on our campus and in our community, state and nation. Racism is systemic, visceral, complex and continuous. It is the normalization of discriminatory behavior towards a group.

The black student activists, however, show no indication they are questioning the accuracy of other allegations of racism on and around campus, and how such unverified (and unverifiable) accusations are benefiting their advocacy:

We know from examples over the past few years and through the personal testimonies from organizational members that racism, discrimination, and intolerance is alive and well at K-State. … We will continue to be resilient and speak out against hate. We stand by the need for a multicultural student center, need based scholarships and cultural competency courses for our K-State community.

Inexplicably, Kansas State’s Twitter account still has a “pinned” tweet to President Richard Myers’ Nov. 2 statement in response to the incident, before it was revealed as a hoax, as of early Wednesday morning.

Myers told the community the vandalism was “a direct attack on the values of our community” and said the school’s response would be to “ensure the safety of those affected by this attack,” which as it turned out was no one.

In response to what was revealed as a hoax, Myers said campus police would “immediately increase its patrols and visible presence” across campus, encouraged students to use “the many resources we make available through student life and our counseling center,” and promised the school would “make additional resources available” if anyone requested more than it already offered.

He even called on county police to unleash its scarce spending on the investigation into a now-discredited incident, and to request state and federal resources.

The school has not acknowledged in any statement of its own that the incident was a hoax, simply retweeting the county police’s statement, which didn’t even disclose in the tweet itself that the vandalism was a hoax.

Read the BSU’s statement and Myers’ original message to the community.