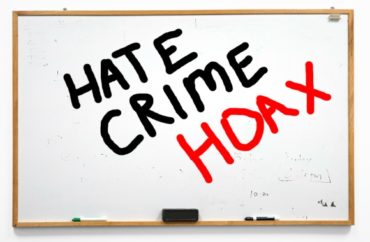 A black male student at Albion College has been identified as the source of racist graffiti that recently rocked the Michigan institution.

“Albion police brought the 21-year-old Black male in for questioning on April 6, according to Chief Scott Kipp. The student admitted to creating most of the graffiti, and video evidence from Albion’s Campus Safety Department confirms the statements made by the student,” MLive reports.

Once the investigation is complete, the case will be forwarded to the Calhoun County Prosecutor’s Office for possible charges, Kipp told MLive.

According to images of some of the graffiti posted on Facebook and the campus student newspaper the Albion Pleiad, the vandal wrote on campus walls “Die n***** please” and “Call the swat #KKKTime.”

“Since March 28, Mitchell Towers has been vandalized with racist and anti-Semitic graffiti on at least four different occasions. One of the most violent messages came on Monday when the message, ‘White lives Matter Rally at 4/7/2021 Let’s Kill all N—— on this Campus’ was left,” the Pleiad reported.

Even though the suspect has been identified as black, it has not ebbed racial tensions on campus, reports journalist Andy Ngo.

“Despite the white supremacist graffiti turning out to be a #HateHoax by a black student, people at @albioncollege are boycotting classes again for a third day. They have a list of race-related demands,” Ngo tweeted.

Despite the white supremacist graffiti turning out to be a #HateHoax by a black student, people at @albioncollege are boycotting classes again for a third day. They have a list of race-related demands. pic.twitter.com/hxX7U3KYny

Meanwhile, the school released a statement on Twitter that did not even mention the race of the suspect.

Earlier today, we identified the individual responsible for the racist and anti-Semitic graffiti in Mitchell Towers. The student, who was acting alone, acknowledged their responsibility for these incidents. (1/5)

“They have been immediately removed from campus and placed on temporary suspension while we conduct a full investigation as part of our student judicial process,” the statement read.

It went on to bemoan racism and suggest that although the incident has been identified as a hate crime hoax the campus still struggles with racism:

But we know the acts of racism that have occurred this week are not about one particular person or one particular incident. We know that there is a significant history of racial pain and trauma on campus and we are taking action to repair our community.”

We will change and heal together as a community, because we are committed to doing the work.

Right now, we encourage all members of our community to listen, respond and care for one another, and lean on the faculty, staff, and community members who have been gathering today to make sure we are supporting you. We have your back.

Ngo responded on Twitter to the university, asking: “Given that it was assumed by your faculty and administration that this was a white supremacist attack, why didn’t you inform the campus that the student suspect is black?”

His reply had 2,000 likes by Thursday night.

The Pleiad reports that a campus official did at least specify in an email sent Wednesday afternoon to students and staff that the suspect is a “current student of color.”

A local CBS affiliate reports that students “are asking administration for a wellness day on Friday, April 9, so they can process everything that has been happening on campus.”