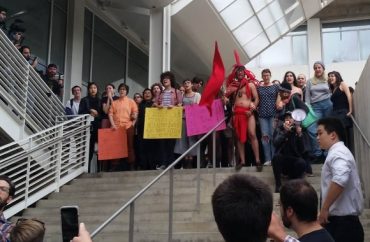 A horde of student protesters crowded in front of UCLA’s Broad Art Center on Tuesday to prevent hundreds of Milo Yiannopoulos fans from entering the venue and hearing the conservative-gay firebrand speak.

A female student has an emotional breakdown against pro-Yiannopoulos fans waiting in line (video below).

A female protester disrupts the event shouting “I hate you” at Yiannopoulos at the top of her lungs.

Just another day on the “Dangerous Faggot” tour. Yiannopoulos’ visit at the behest of the Bruin Republicans on Tuesday had no shortage of drama, par for the course for the Breitbart journalist as he travels the country and whips up fans and haters at campuses.

Although many guests had lined up hours before the event’s start, police officers manning security did not appear to attempt to disperse the eclectic crowd of student protesters blockading the main entrance so guests waiting could go inside.

Meanwhile, shouting matches ensued between the hundreds waiting in line and the 75 or so protesters lining the entrance and flanking the building.

“Bruins against hate!” — aided with a megaphone — was met with “USA” or “Build that wall!” Chants and taunts passed the time.

The guests and demonstrators never got physical aside from when a cookie was thrown down at those in line. Meanwhile, the main entrance to the center appeared useless as protesters refused to leave and police refused to act.

None of the people waiting in line attempted to break through the barricade.

At one point a female protester had something of an emotional breakdown, dropping a spew of F-bombs down at the pro-Yiannopoulos crowd during an apparent shouting match with some people waiting in line.

Eventually, a throng of people from the back of the two lines waiting to get into the center rushed a back entrance, and the lucky made it — while the people who had arrived early and waited as instructed by organizers at the front of the lines were apparently out of luck. It didn’t matter if they had waited three hours.

After the other entrance was discovered, protesters simmered down, and police stood in front of the main entrance to prevent the protesters from entering the venue.

@Nero tried to get in to your event but was blocked off!!! pic.twitter.com/uylfJMMFC0

The mayhem caused the “Feminism is Cancer” talk — slated to begin at 7 p.m. — to be delayed at least an hour.

During Yiannopoulos’ appearance, two females began shouting down at him, yelling “you’re spreading hate, you’re spreading hate speech.” In response, the whole place went nuts, booing the women and telling them to get out of there. The women walked to the back of the room.

Yiannopoulos ended up telling them to “wait your f*cking turn” — and at one point one of the females yelled “I hate you!” at him. The crowd yelled back “hate, hate, hate, hate!”

Eventually, the two women again started shouting “you are spreading hate,” at which point they were led out by authorities.

During his talk, Yiannopoulos said of the protesters: “I don’t care about those people, because they are a tiny minority that has run rampant on campuses.” But he added their time is up.

VIDEOS AND IMAGES: Jason Chulack, for The College Fix