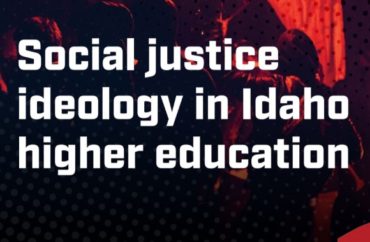 Social justice proponents are steadily transforming the public institution from within, scholars argue

Social justice has fully permeated academics at Boise State University, according to a new research report that suggests such a situation on campus “divides the world into aggrieved minorities and oppressive majorities.”

Scholars Scott Yenor and Anna Miller, in their December 2020 report “Social justice ideology in Idaho higher education,” break down how social justice proponents have “infiltrated the highest level of the BSU administration” and are steadily transforming the public institution from within.

“BSU is adding to its social justice mission every year,” the 36-page report states. “Social justice education at BSU is no longer in its infancy. It is heading toward maturity, spreading into hiring, policies, curriculum, and student life.”

The report, jointly sponsored by two center-right think tanks, the Idaho Freedom Foundation and the Claremont Institute’s Center for the American Way of Life, states that:

· BSU has hired several administrators to push such initiatives since beginning its intentions to transform the university in Summer 2017.

· Administrators have adopted policies in hiring and student experience to further the social justice cause and have announced a new emphasis on “inclusion and equity” throughout its colleges.

· Social justice education has a significant presence in the General Education requirements at BSU.

· Social justice ideology plays a significant part in at least 14 departments at BSU.

· The Residence Hall experience is infused with social justice ideology, as is the Writing Center.

During a Jan. 28 webinar hosted by the National Association of Scholars to discuss the findings, Miller said that “students cannot graduate at Boise State without taking a minimum of four or five social justice courses in their general education requirements.”

Miller is an education policy analyst at Idaho Freedom Foundation and the webinar was hosted by the National Association of Scholars.

Yenor, a Washington Fellow at the Claremont Institute’s Center for the American Way of Life and a member of the National Association of Scholars, noted that “the administration, where it can act without obstacles and on its own, is doing a job of prioritizing this social justice ideology over the other aspects of its core educational mission.”

According to the report, “once a university announces its commitment to social justice education, it must permeate into its colleges and schools.”

Yenor, who is also a political science professor at Boise State University who had his own run-in with the social justice crowd after he criticized radical feminists in 2017, stated that each individual college at Boise State had published a statement emphasizing its commitment to the “shared values” of social justice—diversity, equity and inclusion.

Yenor also noted that a student board, established and paid by the BSU administration, had seemed to have taken an active role in kicking off of campus vendors who support the police.

“The Inclusive Excellence Student Council … has really become a third branch of the student government here,” he said.

In addition to providing a clear picture of how social justice education permeates Boise State, the report offers nine reforms Idaho lawmakers could implement to root out and remove the teaching of social justice from Idaho’s universities.

Another recommends that the state legislature adopt a resolution that affirms “social justice education does not serve the common good.”

Miller said that while their report recommends ways to protect free speech, she also believes that policies aimed at protecting free speech are not enough since they don’t “necessarily change [a university’s] ideological commitments.”

Miller also noted that the report has already gotten the attention of the legislature.

“It’s influenced them to a point where when university presidents came to present to legislative committees, legislators actually asked questions based on our report,” she said.

Yenor said that he and Miller created the report because they believed “developing an objective way of measuring the development of social justice ideology on each of [their] campuses” was invaluable.

The report on Boise State is part of Yenor’s and Miller’s larger project to examine and evaluate all the public universities in Idaho.

Yenor noted that they were only about one month away from finishing their second report—one on the University of Idaho.

“This project began at Boise State, but we’re definitely not finished yet,” Miller said.

Both Yenor and Miller expressed their hope that their work will serve as a template or launching pad for others to examine universities in other states.

“This is something we’re both very persuaded can be … duplicated at other universities,” Yenor said. “If we could get a group of something like 100 universities to analyze, we could rank them. We could actually do a scientific study of how the universities, themselves, are captured by this ideology.”

Yenor also said that such work is “part of retooling conservatism.”

“Conservatism has long talked about higher ed reform in terms of multiculturalism versus freedom … and now it’s to the point where we have to say it’s social justice ideology or America,” he said.

Yenor argued that social justice ideology not only harms the “advancement of knowledge,” but also “harms the social fabric” of the country.

“This ideology undermines the idea that we can live together in peace and harmony as fellow citizens in a liberal republic,” he stated.