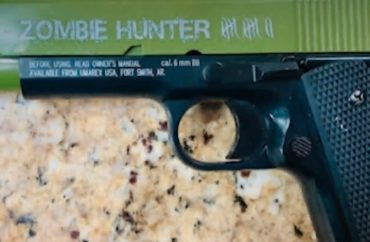 Suspended him for five days, didn’t tell parents it was recording class

For anyone who thought online classes would mean fewer police interactions …

The news station obtained the El Paso County Sheriff’s Office report from the incident, which confirms Elliott’s teacher saw him “flash” the gun across his screen.  She told the police “she assumed it was a toy gun but was not certain,” so notified the principal, who called the police on the boy, who has ADHD and learning disabilities.

The principal didn’t tell his parents before sending the cops:

“It was really frightening and upsetting for me as a parent, especially as the parent of an African-American young man, especially given what’s going on in our country right now,” said Isaiah’s father, Curtis Elliott, in an exclusive interview with FOX31. …

“For them to go as extreme as suspending him for five days, sending the police out, having the police threaten to press charges against him because they want to compare the virtual environment to the actual in-school environment is insane,” said Dani Elliott. …

“He was in tears when the cops came. He was just in tears. He was scared. We all were scared. I literally was scared for his life,” said Curtis Elliot, fearful that deputies might overreact to having the school principal tell them a young Black boy was potentially armed with a gun.

Deputies told the 12-year-old that his behavior could have led to criminal charges and warned him that option was still on the table if he did something similar again, according to the parents.

The district is refusing to provide a copy of the Zoom incident to the Elliotts, though a deputy showed it to Curtis:

[He said] the video shows his son sitting at home on his sofa when he momentarily picks up the toy gun on the right side of where he’s sitting and moves it to his left side, not realizing that in the process his teacher and fellow students saw him move the gun across the computer screen.

The district “seemed to acknowledge it recorded Isaiah Elliot’s virtual class without parental permission” in responding to critical comments on its Facebook page, Fox Denver reports (the page has since been hidden, as has the school’s page):

The platforms we use for distance learning have the feature to record classes for educational purposes. During our first week of school, we were still becoming familiar with the platform. It is not our current practice to record classes at this time. Parents will be notified if that changes. We will continue to support all families in our school to make sure they feel safe, respected, and educated.

It claimed its response was not racist or discriminatory. The Elliotts said they intended to transfer Isaiah to a private or charter school as a result of the incident.

Even though the incident is public and Isaiah has been identified, the district refuses to acknowledge its actions and its punishment of the boy. It claims “[p]rivacy laws” prevent such release of already public information.

It had to send police to the Elliotts’ home because school board policies are applied “whether we are in-person learning or distance learning. We take the safety of all our students and staff very seriously. Safety is always our number one priority.” The district’s Twitter page is still live.

“There are many reasons to oppose virtual learning as the new default for American public K-12 education: Perhaps most importantly, it neglects school’s vital role as a form of daycare,” Robby Soave writes at Reason.

“But the opportunity for the state to invite itself into the home and make trouble for hard-working parents and innocent children is also a serious concern,” he says.