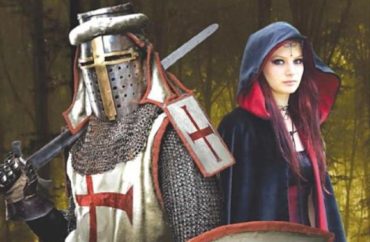 The English department at the University of Warwick in England has appended a trigger warning to “Ivanhoe,” a classic 19th century novel written by Sir Walter Scott.

The department warned students about “offensive depictions of people of colour and persecuted ethnic minorities, as well as misogyny” in the 1819 epic novel, The Telegraph reported on December 27.

The text “concerns the life of Sir Wilfred of Ivanhoe, a fictional Saxon knight. Despite the criticism it received because of its historical inaccuracies, the novel was one of Scott’s most popular works,” according to Britannica.

“The work includes passages depicting black slaves, who leave medieval characters ‘appalled,’ as well as Arab Muslim captives,” according to The Telegraph. “These are shown, along with other key characters, as being prejudiced against Jews.”

Additionally, some have argued that female characters such as the Saxon Lady Rowenna are “depicted as mere pawns in the political intrigues of the male characters.”

On the other hand, “it has been argued that the ethnic minorities in Ivanhoe … are accurately portrayed as facing prejudices they would have faced in medieval England,” the paper reported.

“News that the University of Warwick is warning that Ivanhoe, perhaps Scott’s most famous work, might somehow disturb its students is disappointing but no surprise,” he told The Telegraph. “All manner of titles can face this as we seem to have lost the ability to appreciate any artistic output as a product of its time.”

“The University of Warwick’s silly warnings aside, it is sad that some use their energies not as Scott did, to create great art, but to attempt to destroy it,” he said.

The university noted in a statement that such trigger warnings are optional and chosen by the professor or department.

“We believe students should be exposed to challenging ideas, stories and themes through their studies and view it as an essential part of learning and understanding different perspectives,” a spokesperson from the university told The Telegraph. “That’s why the university does not ask departments to issue content guidance notices for course materials.”

The spokesperson added: “However, a small number of departments and academics choose to do so, making their own judgment and rationale for deciding on what guidance they feel may be needed for the coursework they set. We fully respect our colleagues right to exercise their academic freedom in this way, but the practice remains rare within the university with less than one per cent of our overall curriculum including any content guidance.”