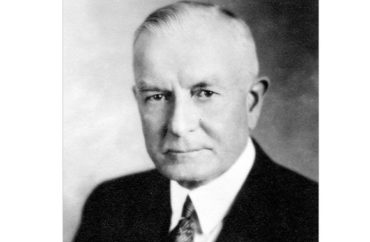 Brown University has voted against renaming a building named for the former CEO of IBM, Thomas Watson.

The Advisory Committee on University Resources Management unanimously rejected a request from the student government to remove Watson’s (right) name over allegations the company profited from business with Nazi Germany in the 1930s. The committee reached its decision in July but only recently released its report.

Faculty committee members Mark Blyth and Lisa Di Carlo did not respond to College Fix inquiries in the past week that asked for an update on next steps.

ACURM is responsible for managing donations and donor intent. Its July report contains its reasoning as well as a copy of the student government resolution.

“Machines manufactured and maintained by Dehomag, IBM’s German subsidiary, were leased to Nazi Germany and used to facilitate the Holocaust and operation of concentration camps,” the student government resolution said.

This claim, and others, comes primarily from IBM and the Holocaust, a book by historian Edwin Black. He provided The College Fix with a copy.

“IBM machines were used in Germany and IBM sold its wares to the Nazi regime right up until the declaration of war,” the Brown University committee said.

“However, acknowledging this former fact, that of trading with Germany prior to 1941, does not prove that Watson himself was either ‘excessively greedy’ and thereby a special enabler of the Nazi regime, nor was himself in any way antisemitic,” the committee report said. “Many other American companies were invested in Germany at the same time and many to a much higher degree.”

The report questioned the claim that IBM’s punch card system was used to track down Jews and other groups targeted by the Nazis. “Claims that the concentration camp inmate number system was an IBM number system is only made by Black,” the report said. “Since Dehomag (IBM’s German subsidiary) machines only arrived in the camps in 1944 this seems unlikely.”

Overall, the investigation found “no direct evidence that Watson knew, especially prior to 1938, that Nazis were planning a Holocaust nor that he wanted to aid and abet them, nor took action to actively do so.”

Alex Mehran, the great-grandson of Watson, told the committee that his great-grandfather was “non-racist.”

He sent excerpts from The Lengthening Shadow regarding the former CEO’s position on Germany’s treatment of Jews. “Within a year of the Berlin congress, where his hopes had run high, Watson found himself strongly protesting the German policy toward Jews, warning Hitler that his course was making trade with the United States almost impossible,” the book said.

After ACURM had reviewed both sides’ claims, it voted against the renaming effort and unanimously voted to propose alternatives to renaming the CIT, according to the report.

Lastly, a third alternative would be the formation of a committee that reviews current and
future names of all buildings and programs at Brown in order to ensure that the names “are associated with donors and individuals whose values and integrity are in line with those of the University.”

President Christina Paxson said she supported a lecture on business ethics but did not want a plaque or a renaming committee.

Paxson said there is already a gift and naming policy in place that Brown University can utilize. “Should issues about gift acceptance or naming arise in the future, the University will adhere to
the principles by which gifts are accepted that advance Brown’s mission and that guide decision- making in the extraordinary circumstance of considering whether to rename or remove a name that had been previously approved.”

She has not responded to a request for comment from The College Fix in the last week about the progress of the annual lecture.