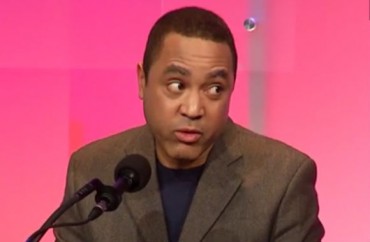 In a recent piece in The Atlantic, Columbia Professor and linguistic expert John McWhorter (pictured) discusses several scenarios in which white people can use the “n-word” with impunity. In the essay, McWhorter defends white academics who simply refer to the word instead of actually using the word to refer to African-Americans.

Specifically, McWhorter, who is African-American, comes to the defense of Laurie Sheck of the New School in New York:

You may not have known that despite the resonance of the title of the renowned 2016 documentary on James Baldwin, I Am Not Your Negro, Baldwin’s actual statement, during a 1963 appearance on public television, was “I’m not a nigger.” Early last spring semester, Sheck, who is white, was teaching a graduate seminar on Baldwin, and one of the questions she posed for discussion was why the documentary title had substituted “Negro” for “nigger.”

That’s good teaching. She was evoking a word with one of the richest, nastiest, and most complex ranges of meaning in the English language. What did Baldwin mean by summoning it in 1963? Why, today, did the creators of that documentary substitute “Negro”? And having answered those questions, then we might examine the particular resonances of that word. The indifferent teacher asks things like “What did you think of the essay?” or “Does the essay reflect any of your personal experiences?” A special one tries to get the students into the head of the creator, into his times.

Of course, the story becomes familiar from there. A white student lodged a complained against Sheck for using the word, even though it was in the context of an academic discussion. Sheck was recently “cleared” for using the word after being instructed to review the school’s anti-discrimination policies.

If I were angry with Sheck for uttering the word in a sympathetic and sensitive discussion, that would make me seem, in being so hypersensitive to injury so abstract, inferior indeed. Furthermore, if nonblacks embrace this hypersensitivity as a way of showing that they are good people, they make me feel exploited.

In demonstrating the prevalence of such cases, McWhorter cites an April 2019 report by College Fix student reporter Matthew Stein of Swarthmore College that highlights four recent accusations made against professors for using the word in class discussions. In one case, an instructor was suspended by a school that had actually used the slur in one of their own press releases:

Similarly, professor Paul Zwier of the Emory University School of Law drew heavy criticism, and a student petition calling for his removal, after his use of the word “nigger” in class and during office hours while speaking with a student. Zwier, like Adamo, did not direct the word at any student; he rather referred to it while discussing law cases.

Following the references to the word, Zwier was placed on leave and barred from teaching required courses at the law school.

Reached via email, Zwier defended his usage of the word, citing numerous other individuals who have referred to it, including Martin Luther King, James Baldwin, Barack Obama, President Jimmy Carter, William Faulkner, Flannery O’Conner, Tara Westover, Ta-Nehisi Coates, and others.

Zwier also noted that Emory University has used the word in at least one press release, describing a conference about a professor who wrote a book about the word. He also pointed out that an Emory anthropology professor used the word in the past without suffering professional consequences.

McWhorter notes that the situations in which white people can use the “n-word” are very narrow, and even then, it should not be used wantonly or repeatedly.

MORE: Augsburg University: a case study in ‘get more diverse, get more authoritarian’