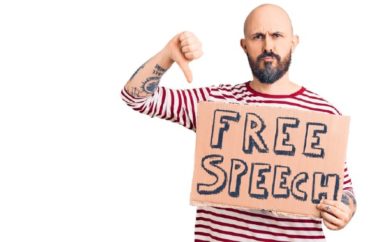 Free-speech on college campuses is in a ‘death spiral,’ an education editor recently wrote in a Newsweek essay. The opinion piece is based on a recent survey of campus expression conducted by RealClearEducation, College Pulse, and the Foundation for Individual Rights in Education.

“Overall, the answers we got paint an ominous picture,” Nathan Harden, a former Fix editor and current RealClear editor, wrote. “When we asked students if they were comfortable publicly disagreeing with a professor about a controversial topic, only 40 percent said yes.”

Harden said he is most troubled by students who endorsed violence to stop speech they do not like.

The most troubling revelation of the survey is how comfortable students are with resorting to disruptive conduct to crush speech they don’t like. Nearly one in four students say it’s acceptable to use violence to stop unwanted speech. At some elite universities, that number is as high as one in three.

Students aren’t comfortable speaking themselves, and they aren’t very tolerant of others’ speech either.

“It’s no coincidence that in an era when we sometimes hear that ‘words are violence,’ young people now think actual physical violence is an appropriate response to offensive words,” Harden said. “The great irony of our age is that personal hypersensitivity tends to desensitize us to the suffering of others. Speak correctly to me—or else.”