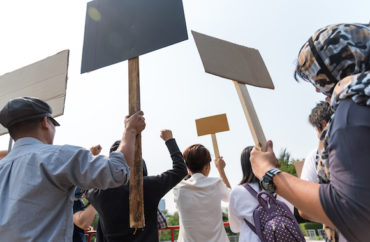 Survey ranks the 10 best and worst schools for free speech in 2021, according to students

Sixty-six percent of college students think shouting down a speaker they disagree with is acceptable to shut down their talk, and another 23 percent believe violence can be used to cancel a speech, according to a wide-scale survey released this week.

The 2021 College Free Speech Rankings, a follow-up on the first survey in 2020, asked over 37,000 students at 159 top-ranked U.S. colleges and universities to share their views about free speech on campus.

Published by the Foundation for Individual Rights in Education, RealClearEducation and College Pulse, the results show freedom of expression on campus remains a pressing concern.

Not only do 66 percent of students say it is acceptable to shout down a speaker to prevent them from speaking on campus, that result is up four percentage points from last year.

Another key finding is that nearly one in four students say it’s acceptable to use violence to stop a campus speech — up 5 percent over last year’s survey — with some elite colleges bringing that figure to as high as one in three students accepting of such violence.

Underscoring these findings, more students are keeping their mouths’ shut, even during a year when most campus activities and instruction moved online.

“Our survey suggests the problem of self-censorship grew even worse in this virtual classroom environment. Whether online or in person, many students say they are afraid to speak their minds or to voice an unpopular view,” RealClearEducation Editor Nathan Harden told The College Fix.

Student participants, surveyed between February 15 and May 30 of this year, were given questions about their ability to talk about difficult subjects, tolerance for conservative or liberal speakers, administrative support for free speech, responses to campus speakers, and comfort expressing ideas.

Based on the results, each school was assigned an overall speech climate score. These scores, along with individual school profiles and student comments, are listed in the 2021 College Free Speech Rankings database, which ranks the best and worst supporters of free speech among America’s largest colleges and universities.

For the second year in a row, DePauw University took the bottom spot on the list, with the lowest score of 50.8 out of 100.

“The 2021 College Free Speech Rankings provide a powerful tool for parents and students who want to know whether their favorite colleges and universities value and protect the free exchange of ideas,” Harden told The Fix.

Students named racial inequity, abortion, gun control, George Floyd protests, and transgender issues as the top five most difficult subjects to have an “open and honest” conversation about on campus. Conservatives, on average, reported that they were much less comfortable expressing their opinions.

Some schools are still better about free speech than others, Harden noted, and students should pay attention.

“The good news is there are some schools that do a better job of nurturing an environment of healthy debate and open inquiry on campus. Those schools are rewarded with high scores in our national rankings,” Harden said.

MORE: Half of college students fear expressing ideas in the classroom: survey