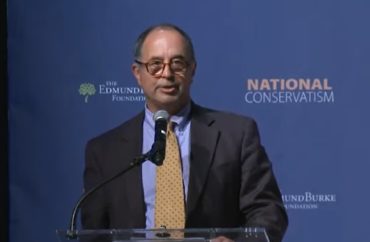 Joshua Mitchell (pictured), a professor of government at Georgetown University, recently said that critical race theory has created rage and division in the United States.

The difficult task of meting out justice cannot be achieved by leveling preposterous charges of guilt or innocence toward one massive group. We do not get dispassionate, blind justice in that way. We get cathartic rage, intent on retribution.

He referenced conservative commentator Megyn Kelly’s decision to remove her kids from school after a letter circulated that said all white people were complicit in racial injustice.

“What does this identity politics madness from the left really teach?” Mitchell asked.

First, you are not a person, unique and precious, worthy of dignified treatment under the law, and also held accountable by law. Second, whatever you might think about who you are, the only thing that matters is whether you are a person of color or white — in other words, pure or impure. Third, if you are white, the only way to rectify your stain or to assert your purity is to attend endless and expensive state-sponsored programs that expand the legion of racial grievance industry workers without making life better for any of the parties concerned. Fourth, human agency is an illusion. You alone are powerless to better your world. Nothing you can do alone or with your family, friends, neighbors or religious organizations is worth the effort, because the forces allied against you are so large as to invite despair. Fifth, the country you love is vile, filthy, and unworthy of your affection. The things you love must be destroyed, because they and your understanding of what is praiseworthy is a product of your white identity. Sixth, racial cohorts are all the same, rather than filled with people who think and behave differently. All whites, rather than some, are unworthy. Your so-called identity group is not a rich plurality that belies easy characterization; instead, it is stripped down and reduced to one of two possible characteristics: guilt or innocence.

In other words, identity politics and critical race theory paints all white people with the racist label until they are cleansed of it by going through retraining programs.

“If we wish to solve rather than exacerbate them, the cheap accounting system of identity politics must be roundly rejected,” Mitchell said.