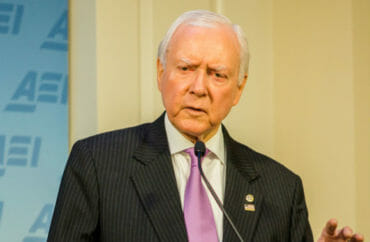 Why reward universities for simply not violating the constitutional rights of students and faculty? Why not make them affirmatively pledge to protect free speech and academic freedom if they want to keep enjoying the federal spigot?

Former Republican Sen. Orrin Hatch writes in The Wall Street Journal that universities are largely responsible for “the politicization of our expert class,” which has created ideological “bubble-shaped, parallel universes” similar to the theoretical multiverse.

Higher education requires a “complete reformation” in order to restore our conception of something approaching “objective reality” on such contentious issues as racial injustice and COVID-19, the 42-year veteran of the Senate argues:

Just as Gutenberg’s [printing press] threatened to undermine the religious authority of the time, the internet threatens to undermine our secular clerisy—the journalists, academics and policy makers who make up the expert class in America and elsewhere in the West. … The gate keepers’ desperate attempts to slow the unfolding revolution and keep control are proving downright draconian.

The spirit of the Inquisition is alive and well in today’s cancel culture. The objective is not to root out nonbelievers in the church but ideological heretics in newsrooms and universities. These institutions are supposed to be bastions of free speech. But in 2020 any journalist or scholar who strays from progressive orthodoxy is ripe for cancellation.

Higher ed and the press “abandoned their teleological mission” when they embraced political activism, increasingly blurring “the line between news and propaganda, education and indoctrination,” which sends people toward fake news and conspiracy theories, Hatch says.

Reforming universities means enacting “a radical overhaul of campus culture,” not only eradicating institutional and cultural efforts to stifle debate (such as safe spaces) but affirmatively attacking “the postmodern ethic that has unseated truth as the academy’s ultimate aim” and expanding intellectual diversity.

To that end, Hatch encourages state and federal lawmakers to use the power of the purse to compel changes. For too long taxpayers have funded academic departments that “look like political re-education camps”:

Legislators control the purse strings, and they can fight back by withholding funds from schools that enforce unconstitutional speech codes. They can go a step further in strengthening academic freedom by tying federal financial support to a university’s willingness to adopt some version of the Chicago Principles, which protect students and professors with divergent views.

On the flip side of the recent “DivestU” campaign by Turning Point USA to convince alumni to withhold donations from their alma mater, Hatch urges alumni and donors to use contractual requirements “to demand a detailed accounting of how their money is being used” in the programs they fund.

“They can also make their contributions contingent on a university’s commitment to cultivating viewpoint diversity and upholding First Amendment freedoms,” he writes.