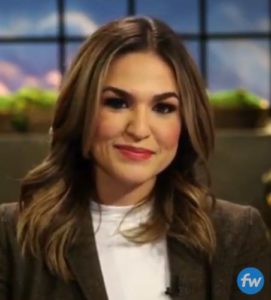 Samantha Sullivan, 29, can vividly recall the moment her lifelong Christian faith was rocked to the core.

She was 18 and had just begun her college career. “God is bulls**t,” her savvy and confident professor told his class of freshmen, a theme he harped on all semester long using a mix of intelligence and wit. By the end of the semester, Sullivan said she was an atheist.

This was in 2008, and she has since returned to her faith, but now Sullivan has decided to share her story in an effort to warn parents.

In an interview with CBN this month, she explained further:

“I find it predatory because these adults are standing in front of 18-year-olds in a position of power wielding their authority and they’re very convincing. They have decades of intellectual experience on these students. They’re supposed to teach people how to think not what to think. They know they’re in this position and I just find them to be very irresponsible with it,” she said.

“… What I would say to parents is just stay involved. Even if your kids seem strong on the surface, always check in with them. Get to know their professors. Check their tweets. There are so many people on Twitter every day now and you can get a sense of how they think. Try and be involved and have the really tough conversations and give them mental workouts before they go so they can defend themselves.”

Sullivan also told her story as a columnist for The Blaze, noting “college professors have the power to shape the minds and beliefs of thousands of young men and women every year. And on college campuses that are increasingly and overwhelmingly secular and hostile to religion, many of those professors wield that authority to rob students of their faith. It almost happened to me.”

Sullivan acknowledged to CBN that after she became an atheist she went through a dark period for about a year that included binge drinking. But after feeling empty and thinking she did not feel herself, she came back to God and the church.