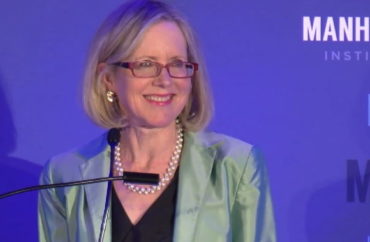 The newly minted City Journal Awards selected Heather Mac Donald as one of its inaugural recipients “for her pioneering contributions to public discourse on fundamental questions of cultural excellence and the rule of law.”

Mac Donald, a fellow with the Manhattan Institute and a contributing editor to its City Journal, is also an advisory board member for The College Fix’s Student Free Press Association. She was presented with the award Sept. 28.

Mac Donald’s acceptance speech included a focus on the importance of journalism that does not paint a false narrative. She recalled her days as a cub reporter for City Journal in the early 1990s after she was raised with the mindset of a coastal elite liberal.

She was assigned to report on a crime spree on New York City’s Upper West Side, so she took to the streets and talked to “as many people as I could, and let them educate me about their lives and the government programs that effected them.”

“Lo and behold,” she added, “an entire world opened up that I had never read about in the New York Times.”

It turns out New Yorkers, including and especially black New Yorkers, like to live in safe neighborhoods patrolled by police, she said. That was as true back then as it is today in 2022, she added.

“The expectation of public safety is not a manifestation of white privilege, it is a civilizational right. … When you stop enforcing the law, you don’t get justice, you get anarchy,” she said.

Under the tenures of Mayors Rudy Giuliani and Mike Bloomberg, New York’s crime dropped 85 percent over two decades, saved thousands of minority lives, and spurred an economic renaissance, Mac Donald said. The two leaders had proven violence and disorder are not the natural condition of major metropolitan cities, she said.

However, the failures of Bill de Blasio and the “national hysteria that broke out after the death of George Floyd in May 2020” has returned New York City to its violence-ridden past, complete with looting, vandalism, innocent pedestrians “beaten with incomprehensible savagery,” and police officers “lethally ambushed.”

“We are again putting the interests of the anti-social ahead of those of the law abiding,” Mac Donald said. “We should never apologize for insisting that everyone obey the law. We should never allow ourselves to be silenced by specious charges of racism.”