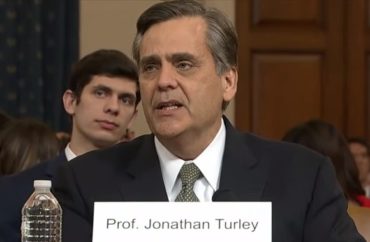 In what looks like an act of foreshadowing, George Washington University Law Professor Jonathan Turley last week chided PBS reporter Yamiche Alcindor, and those who defended her, for bringing up unnecessary charges of “racism” against US Surgeon General Jerome Adams.

Alcindor had asked Adams, who is black, to “respond to claims that he recently made racist comments.” Specifically, Adams used the words “Big Momma” and “Pop Pop” in remarks about African-Americans’ tobacco and alcohol use.

Adams noted his words were “the language that we [African-Americans] use and that I use.”

The foreshadowing comes into play as just yesterday, a student at Turley’s school dedicated a whole column to attacking the professor. In it, the student says Turley has an “ignorance of American culture” due to his unfamiliarity with regional food offerings(!), and that he should be fired (“or at least censur[ed]”) for being “bigoted” and not sharing the “values of the university.”

Many declared that the advice to curtail alcohol and drugs was a racist stereotype of minority communities. Yet those comments are similar to comments made in the past by Democratic and liberal figures. Moreover, Adams has given the same advice to other communities.  However, Adams was appointed by President Donald Trump and soon people were online saying how deeply offended they are over the inherent racism in his warnings or his use of nicknames for parents and grandparents.  One commentator portrayed Adams as not really part of that community: “The Surgeon General is trying to relate to a life he never lived, listen to his voice and they way he speaks.” …

The trend has continued unabated with the pandemic.  For example, there is a raging debate over the concealment of the origin, early spread, and lethality of the virus in China. However, the Council of Chief Diversity Officers at the University of California has issued a “guidance document” to tell students to stop others from referring to the “Chinese virus” or “Wuhan virus.” Michigan State University warned students that use of anything other than coronavirus is unacceptable as part of a warning on hate speech pledge circulated around the school. Some university officials told students to report students using the term as “racist.”

Turley notes he “wrote early” that he would not use the term “Chinese virus” in lieu of its official name, but not because the term is racist. As Bill Maher noted, he says, “Scientists, who are generally pretty liberal, have been naming diseases after the places they came from for a very long time.”