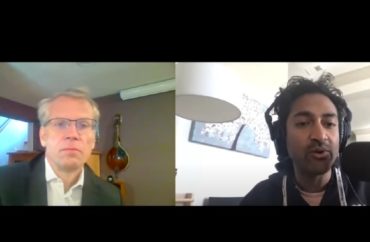 A pair of medical school professors who have been at the forefront of skepticism over the benefits of national COVID lockdowns recently spoke for more than an hour on a podcast about that topic and other related COVID policies.

Martin Kulldorff, a Harvard University med school professor with a background in probability and statistics, spoke to Professor Vinay Prasad, an oncologist and hematologist who teaches at the University of California San Francisco. Kulldorff also is a collaborator on the Great Barrington Declaration, which supported target lockdowns over broad measures.

Prasad said that professors will understandable have differences when it comes to any issue, but he is concerned about how those disagreements are discussed. Prasad raised that issue on his podcast, called “Plenary Session.” The video and a transcript were posted on the American Institute for Economic Research website.

Kulldorf, responded to a question about Prasad about if he would consider himself as “pragmatist.” Kulldorf works closely with public health departments to conduct research and formulate practical solutions.

“I work with practical problems. At the same time, I develop methods. So two sides of the same coin,” Kulldorf said.

Both raised concerns about lockdowns.

“I was actually stunned about these lockdowns, because it was clear to me, and I think it’s obvious by now that when you have a pandemic, lockdowns cannot work,” Kulldorf said. “It can temporarily flatten the curve, and that makes sense, you don’t want to overburden the hospitals in a short time, but it can never suppress the thing.”

Prasad said he would not rule out all lockdowns, but said the approach by the U.S. did not work.

I’ll be honest, my take on it is, I don’t know what the effect size is, of lockdown. I certainly don’t. I think we’ll get a lot of papers in the next decade that try to probe it. To me, I think it’s conceivably possible that, under some circumstances, it has some effect size. Obviously, the lockdown that we did in the US, in a lot of ways, it was a silly intervention. For instance, we were strictest about it in the whole nation in a short period of time, even though some places in the nation had no problem at all. And we were quite strict about it there. And then they eventually fatigued, and went back to doing certain behaviors. And the moment they fatigued, they eventually got the caseload there. And the degree to which we did it, obviously, was as much as we could do it, in this country, which is not welding doors shut.

Prasad said that leaders need to be cautious about mixing science with partisanship.

“I think that many people may be tempted to turn their Twitter feed into a mix of ‘masks work, hydroxychloroquine is unproven, vote for Joe Biden,'” the UCSF professor said. “The more you do that, the more you specifically endorse specific candidates, you become a partisan figure, even unbeknownst to yourself.”

Watch and read the interview.