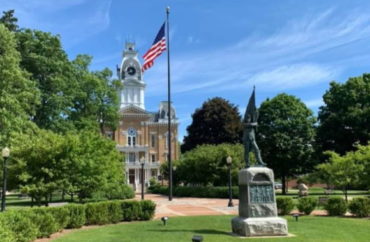 Hillsdale College has received some of the highest pro-free speech rankings in the nation, according to a national survey of students recently released by the Foundation for Individual Rights in Education, RealClearEducation and College Pulse.

The 2021 College Free Speech Rankings asked over 37,000 students at 159 top-ranked U.S. colleges and universities to share their views about free speech on campus.

The findings at Hillsdale — a private, Christian institution in Michigan known for being one of the most popular and influential conservative colleges in the nation — stand in contrast to the rankings for elite schools.

The survey reportedly found that “elite universities are the worst for free speech.”

RealClearEducation reports that “Hillsdale students’ responses to pollsters demonstrate that a robust speech culture exists on the Michigan campus,” adding:

Seventy-three percent of Hillsdale students surveyed said they were comfortable publicly disagreeing with a professor on a controversial subject, the highest percentage recorded at any of the 159 schools in the survey. Additionally, 93% of students are comfortable expressing their view on a controversial subject in a common campus space, like the quad. …

An overwhelming majority of Hillsdale students surveyed believe the administration is committed to protecting free speech on campus. Almost 98% of Hillsdale students surveyed said that if a speech-related controversy broke out on campus, the school would be likely to defend the speaker’s right to advance his point of view. Eighty-four percent said it was very or extremely clear that the administration protects free speech on campus.

In contrast, the survey found “students who attend the nation’s elite schools – those that purportedly thrive in the world of research, innovation and discovery – are actually more likely to try to cancel speech than their peers who attend lower-ranked educational institutions,” RealClearEducation reports:

Nationally, two-thirds of students believe there are cases where shouting down a speaker can be justified. This number is even higher at the nation’s elite schools. Looking at the top 20 colleges and universities ranked according to US News, which includes schools like Yale and Middlebury, close to three-quarters (72%) of students at such schools say there are cases in which trying to disrupt a speaker is justifiable. …

When asked about the acceptability of blocking one’s peers from attending a campus presentation, 40% of students nationally state that there are cases where stopping their classmates from hearing someone else’s views can be justified. In comparison, 50% of students at the top 20 schools think such behavior is justifiable. …

Finally, almost a quarter (23%) of students nationwide believe violent acts could be justifiable to prevent speech. This alarmingly high figure is even higher at the nation’s elite colleges. Thirty percent of students at the top 20 colleges and universities think there are cases where violence is acceptable.

Overall, as The College Fix previously reported, 66 percent of college students think shouting down a speaker they disagree with is acceptable to shut down their talk.