With the March for Life occurring tomorrow, the pro-life movement is on the rise. One Fordham University professor is trying to build bridges and work with the pro-abortion movement, and in an interview with National Review he discussed why he seeks to “find common cause between liberals and conservatives on saving human life and building a culture of life.”

Charles Camosy is an associate professor of theological and social ethics at Fordham, but he doesn’t fit in with leftist orthodoxy surrounding abortion. 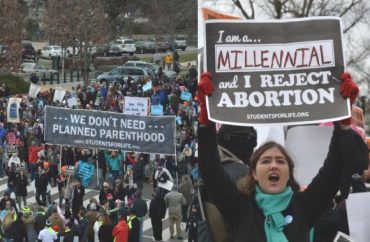 “Well, to be honest, I was disgusted by the recent fetal-personhood series published by the Times editorial board,” he told National Review, referring to a series The New York Times  that discussed the legal concept of fetal personhood and the push for criminalizing abortions. “It not only lacked viewpoint diversity and used offensive language to describe the prenatal child, it cynically used outlier cases to give the impression that one of the goals of pro-lifers is to jail women.”

He then addressed the difficulties of attempting to reach across to the other side of the issue in academia.

“We are being overrun by a certain kind of intersectional discourse that often looks very skeptically at the kind of bridge-building I want to do,” he said. “Instead of engaging in intellectual solidarity and mutually exploring evidence and arguments, we are being corrupted by raw activism and attempts to wield power at the service of a point of view.”

He also expressed hope that the liberal/conservative binary will collapse and the future will be less polarized:

Authentic dialogue, by contrast, requires solidarity with one’s perceived ideological or political opponent. As it becomes increasingly unclear what liberals and conservatives (to the extent those words have any fixed meaning right now) actually believe, this provides important opportunity to see others anew — and create openings for unity that wouldn’t have otherwise been possible.

For him, adoption may be the middle ground that opponents can agree on in the abortion debate. He spoke extensively about his own experience with adoption, saying it “is one way in which one can have an authentic and full family life, but in a way which troubles the neat and clean expectations many of us have for what a family is supposed to look like.”

Camosy explained that he wants government policies that encourage and benefit families.

“I think one of the most important moments for the pro-life movement was our hammering Congress to keep the adoption credit in the midst of the tax-reform debate,” he said.

Although the anniversary of Roe v. Wade is a dark day for him, he expressed optimism for the future of the pro-life movement as it continues to reach across the aisle to work with more moderate Democratic lawmakers.