Liberalism used to mean searching for truth before accepting an accusation is true.

That was the old-school ACLU kind of liberal. The new kind? As National Review‘s Rich Lowry writes in Politico Magazine, it’s “braying for collective justice, regardless of the evidence, to right historic wrongs.”

The campus kangaroo courts that have taken hold over the past several years have colonized fertile new territory in the U.S. Senate, Lowry writes, as it credulously accepts decades-old, evidence-thin allegations against possibly the most women-friendly Supreme Court nominee ever – Brett Kavanaugh.

Celebrated by their sycophants in the mainstream media, Democratic senators have shown repeatedly that they aren’t interested in evaluating accusations of sexual misconduct “case by case”:

The problem is that [accuser Christine Blasey] Ford’s accusation doesn’t seem particularly provable—an alleged incident 36 years ago, with few details to check against—and the Democratic-media complex isn’t very interested in proving it. It wants to take Ford’s truthfulness as a given, as matter of cosmic and gender equity.

“I believe the survivor,” Sen. Richard Blumenthal says of Christine Blasey Ford, asserting her status without having any idea whether it’s accurate. The point here is to take rhetorical and political advantage of her alleged victimhood before it’s been established—indeed to use her assumed victimhood to foreclose any serious questioning of whether she is a victim or not. 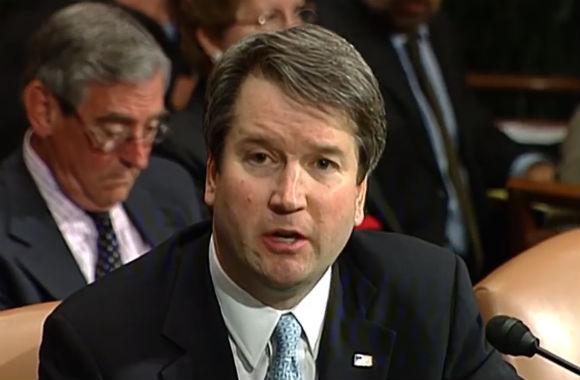 Lowry mocks the documented valor-thief Blumenthal for his ludicrous claim that the Supreme Court will be stained “irreparably” if Kavanaugh is confirmed: “There you have it. The court weathered Roger Taney and Dred Scott, but it will be brought to ruination by Brett Kavanaugh.”

The senator perhaps most responsible for promoting campus witch-hunts, Kirsten Gillibrand, claimed that inviting Ford to testify even privately was “refusing to treat her allegations properly,” which Lowry charitably describes as an “otherworldly” interpretation.

Mazie Hirono doesn’t want anyone to talk, lest the Senate and the country have actual evidence to evaluate. She told not just Kavanaugh but “the men of this country” to “shut up.”

What better illustrates the true motivation of the campus fascists who aren’t satisfied by even Star Chambers against male students – who overwhelmingly come from far humbler backgrounds than the elite creature of Washington who has been nominated – than Sen. Hirono telling men they aren’t allowed to defend themselves?

Putting aside the tendentious history, this is a call for people to subordinate their reason and their moral discernment to a social and political agenda. Not all women are to believed, whatever the past sins of the patriarchy. The Duke lacrosse players weren’t guilty. The University of Virginia fraternity story wasn’t true. The Columbia University student who carried a mattress around as a symbol of her alleged rape [celebrated by Gillibrand] was found, by a campus tribunal, to have falsely accused her supposed assailant.

[A]ccusations of sexual misconduct—like any other accusation—should be evaluated case by case, and on the basis of the evidence. This isn’t victimizing the accusers. It is serving the cause of justice.