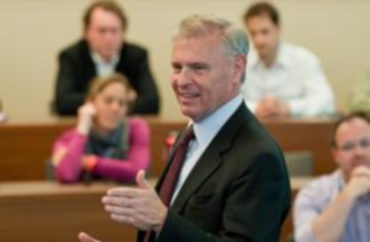 Last year, Stanford business professor Joel Peterson was summoned to respond to a complaint by a student who had been “triggered.” In one of Peterson’s classes, a guest lecturer had claimed to be “color blind.” Peterson had backed the CEO guest speaker up by offering that he, too,  resisted hiring based on skin color, gender or quotas, and had relied, instead, “on character, competence and commitment,” which had evidently offended students.

Peterson lists this incident in an article for The Deseret News, which he called “My road to cancellation.”

Among the other incidents experienced by Peterson on campus:

As demands for skin-color diversity were broadened to include gender and sexual orientation, a student notified me that I’d called on more men than women in two (of four) classes. Knowing that I was no respecter of persons — whether by gender, race, sexual orientation or anything else — I moved ahead with the course, suddenly aware that my interactions with students were being catalogued by identity.

Soon, a Black Lives Matter advocate asked, of all things, whether I would stand for the American flag. To provide context for my decision, I shared a story. As a toddler, I’d seen my mother take a call from the Department of Defense announcing that her fighter-pilot brother had been killed. Honoring her grief, I’d chosen to stand for the flag under which my only uncle had offered the ultimate sacrifice. The student’s response was presented as an irrefutable argument; my choice was “racist.”

Wanting to preserve his place at the university, Peterson kept his mouth shut as wokeism engulfed the campus:

Because such uninformed activism brought with it a minefield of woke hostility, I kept to myself any reservations I harbored about critical race theory, gender fluidity and climate alarm. And, when Stanford’s math department proposed achieving “racial equity” by eliminating AP math (as racist, no less), I also kept quiet. Instead, I hoped my hardscrabble climb to CEO might inspire those who saw themselves as victims of inequity. Ironically, those who strained to label my uphill journey a product of “white supremacy” were often the very beneficiaries of woke preferences.

Peterson, the former chairman of JetBlue Airways, said he received support from students who weren’t looking to be coddled:

Forced to consider moving to a less hostile teaching environment, I heard from former students. One female “of color” offered that, of all her professors, I’d been the most supportive of women and minorities. Another confirmed that the majority of his classmates felt silenced by the threats of a racist label. One student even scolded me for having allowed “the slings and arrows” of the woke to achieve their hoped-for effect.

But ultimately, he thinks schools under attack by progressive ideology will break apart. He concludes:

While I may well survive, America will not survive the rewriting of its history, the violation of its Constitution and the abandonment of the freedoms it has promised to citizens of all political persuasions, ethnicities, genders and orientations. No matter our differences, unless we preserve free speech, secure our Constitution and re-enthrone individual responsibility over victimhood, all the king’s horses and all the king’s men will be unable to put Humpty Dumpty back together again.