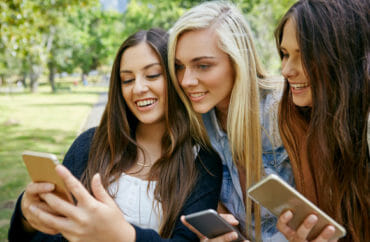 The promise of the internet, as it was evangelized in the 1990s, was not only to help people create like-minded communities that were difficult to form in person, but also to expose people to new ideas and diverse ways of thinking. Facebook founder Mark Zuckerberg is still making that argument.

It hasn’t quite worked out that way, especially for the generation now in college, according to a recent survey by the American Enterprise Institute.

Sarah Lawrence College professor Samuel Abrams, vilified by students for his research documenting the overwhelming leftism of college bureaucrats, elaborates on the survey and Generation Z in a blog post for AEI, where he’s a visiting scholar:

The numbers are slightly higher for millennials and Generation X: 11 percent were helped “a lot” while just under half of each said social media helped “only a little” or “not at all.”

Perhaps surprisingly, social media is helping relatively few Gen Zers connect with people they already agree with. Less than 20 percent said it helped them “a lot.” Around two in five for the three youngest generations said social media helped “only a little” or “not at all” with connecting with like-minded people.

“Students in my classes and those I have met around the country acknowledge that their online behavior does not lend itself to being exposed to varied viewpoints,” Abrams writes:

Gen Zers — Americans who are now between 18 and 22 and who are entering a presidential election cycle for the first time — are not being exposed to much if any cross-cutting socio-political discourse in social media. Many students in fact report that they really do not like discussing politics on social media and sharing much beyond pop culture.

The proportion who say they express their political views publicly online – about 1 in 4 – is “remarkably low for a digital generation that is constantly connected and online in some form,” he says.