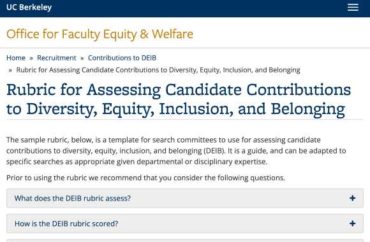 Universities increasingly require prospective faculty and promotion-seekers to commit to DEI ideology, including Ibram Kendi’s vision of “anti-racism,” according to an August 10 column in Unherd.

“Ideological litmus tests are becoming the norm in American academia,” argued the piece, written by John Sailer, a fellow with the center-right National Association of Scholars.

Nearly 20 percent of faculty job listings require the submission of “diversity statements,” according to a recent survey he cited from the American Enterprise Institute.

To give one example: last year, the highly-ranked Oregon Health and Science University School of Medicine released its Diversity, Equity, Inclusion and Anti-Racism Strategic Action Plan, listing dozens of “tactics” for advancing social justice. Here is an example:

“Include a section in promotion packages where faculty members report on the ways they are contributing to improving DEI, anti-racism and social justice. Reinforce the importance of these efforts by establishing clear consequences and influences on promotion packages.”

The reference to “consequences” reads like a warning to dissenters. … Thanks to the ubiquity of Ibram X. Kendi’s work, many American professionals are primed to point out that anti-racism, far from merely being “not racist”, entails embracing “race conscious” policies, coupled with the belief that any disparity is by definition racism.

With official DEI requirements for promotion and tenure on the rise, Kendian “anti-racism” has come closer to a formal requirement for many in academia. In its 2022 survey of tenure practices, the American Association of University Professors found that 21.5% of the institutions it surveyed had DEI criteria in their tenure standards. For larger institutions, it was 45.6%. As diversity officers increase, so too will their preferred policies.

Sailer added that dissenters will encounter prejudice in hiring and promotion. Job candidates at UC Berkeley, Emory, and Texas Tech University Department of Biological Sciences, for example, will receive a low diversity score for treating “everyone the same.’

Additionally, he wrote that the California Community College System, which serves nearly two million students, “recently mandated that all faculty, staff, and administrator evaluations ‘include DEIA [diversity, equity, inclusion, and accessibility] competencies and criteria as a minimum standard” for evaluating employee performance.

Enforcing “cultural competencies” as ideological adherence to intersectionality and other oppression theories would silence free speech and is probably illegal under the First Amendment, Sailer argued, suggesting professors may soon be forced to leave their profession or submit: “Soon, it seems, American academics can expect a choice.”