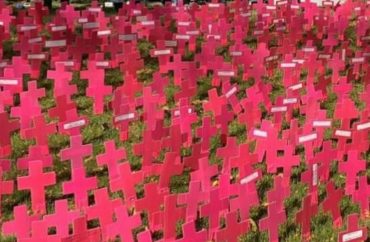 University said they responded and helped

California Polytechnic State University in San Luis Obispo has opened an investigation into a student who allegedly took part of a College Republicans pro-life display but then returned it.

It’s not clear if any punishments or results will come out of the February 1 incident, because the university refused on March 9 to say if the matter is still being looked at.

The media team for the public university previously said the Office of Student Rights and Responsibilities were looking into the incident.

Spokesperson Matt Lazier on Wednesday told The College Fix he could not “provide any update on the matter,” beyond a previous statement about the university’s response and the student conduct investigation.

“I’m sorry, can’t comment further on it,” Lazier said, when asked by The Fix on March 9 if it would be accurate to say the matter is still under review.

The display, set up by the school’s College Republicans chapter, included signs and 972 pink crosses to represent the number of abortions committed by Planned Parenthood every day, (example pictured).

Sean Senn, secretary of the Cal Poly CRs chapter, stated that he and other chapter members had created the event to draw attention to these abortion deaths, however; it was halted when counter-protesters attacked the display.

“A few hours after we set up, some pro-abortion advocates began to stomp, rip, and throw away the pink crosses and steal our other pro-life signs on display,” Senn stated in a news release.

He went on to say that during the acts of vandalism, he and other organizers of the demonstration remained calm and called for security to handle the situation.

Senn alleges that campus security did not respond to their calls for help and did not assist them in stopping the destruction of their property. He further alleged that rather than track down parties at fault, the school suspended the club’s registration status.

There were no photos provided of the display or incident and the chapter did not respond to an email and Instagram message sent in the past month. The Fix asked for comment, photos and if the group had filed a police report.

The police deferred to the university’s media team for comment when asked for a copy of the report and an update.

Cal Poly disputes the narrative that it did not help the students.

“University staff were on hand for some of the Feb. 1 event you reference, after being called out for assistance by students who were demonstrating,” spokesperson Carolyn Lambert told The College Fix via email on February 10.

There were counter protestors present at some points. However, university staff helped protect the property on display and reminded counter protestors that debate is allowed but destruction of property is not, and they were able to dissuade any vandalism while present.

Cal Poly Police did receive one report of possible vandalism during the demonstration. However, officers who responded to the call indicated that the matter had been settled between the parties, when the student who removed part of the display was asked by the demonstrating group to return it and complied with the request. That report was also referred to our Office of Student Rights and Responsibilities for review. Student privacy protections prevent us from discussing any specific OSRR matters in further detail.

She said the account freeze is unrelated to the display and alleged vandalism.

“I can confirm that the club’s status was frozen earlier in the day Feb. 1 because of an academic eligibility issue within the club’s membership, not related to the event later in the day,” she said in her February 10 email.