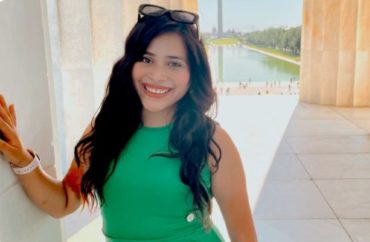 According to Noelle Fitchett (right), students who want an exemption from the public university’s vaccine requirement just have to state a simple objection and the school will approve it.

Currently, 83 percent of students have submitted verified vaccination records as of September 28, while five percent have been approved for exemptions, leaving a 12 percent gap of unknowns.

The efficacy of the COVID vaccines has paid off, as the test positivity rate for the past week is only .2 percent.

Fitch, who did not undertake this endeavor on behalf of any specific student organization, shared more information with The College Fix about her advocacy. She is also a reporter for Campus Reform.

“I called the president and asked to speak with him. The Dean then returned my call and set up a meeting,” Fitchett told The College Fix. “Additionally I emailed the Dean and president regarding my concern of the students being locked out of their portal. The Dean ensured that students wouldn’t be locked out, rather they’d be greeted with a pop up reminder about the mandate.”

She previously participated in a protest against the policy but did not win any policy changes at the time.

Fitchett originally feared that students would not be able to register for classes if they did not get vaccinated, but the university confirmed that students would just need to indicate an objection and that would suffice. Officials with the public university had told students they would be “locked out of their portal and unable to register for classes” for the spring semester.

“Religious exemptions don’t only apply to religious people. You can mark on your portal that you don’t want the vaccine (for any reason), and you will be approved,” she wrote on an Instagram post on September 24. “I’m incredibly blessed that the president of my university took the time to speak with me and clarify many of my concerns and the students. He’s absolutely phenomenal.”

Incredibly blessed to have a president who genuinely cares about the students concerns and choice. Thank you for taking time out of your day to meet. He was phenomenal. 🙌🏽@TitanPrezVirjee @csuf pic.twitter.com/e9D7bFzGBF

The university confirmed Fitchett’s statements and that she spoke to President Fram Virjee and Dean of Students Vincent Virgil.

The religious exemption applies to those who have religious beliefs OR beliefs, observances, or practices which an individual sincerely holds and that occupy a place of importance in that individual’s life, comparable to that of traditionally recognized religions.

The same language is found on the university’s vaccine information page.

Furthermore, Fitchett said the administration will ensure that individuals who have chosen not to get vaccinated will not face discrimination.

“The President has ensured that nobody should feel harassed or discriminated against for choosing what they want to do,” she said.