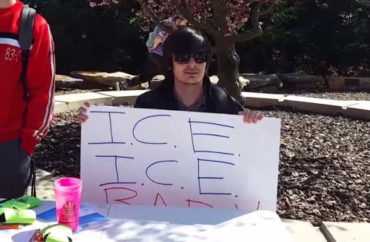 In response to saber-rattling from the University of California-Merced student government, the California College Republicans is hinting at legal action.

On Monday the CCRs publicly warned the Associated Students of UC Merced not to follow through on a threat from its legislative branch last month to defund all “partisan organizations” on campus in response to controversial tabling by the campus College Republicans chapter.

The chapter advertised the club March 6 with signs that read “I love undocumented firearms” and “I.C.E. I.C.E. baby,” referring to Immigration and Customs Enforcement, while offering the phone number for ICE.

The stunt provoked condemnation from the administration, with Associate Chancellor Luanna Putney accusing the CRs of “harmfully” targeting undocumented students with their “hateful and bigoted tactics” in a campuswide message March 9.

The legislative branch of ASUCM condemned the “violent actions” of the CRs – holding signs in public – in a March 21 statement. It also condemned the ASUCM’s Inter Club Council for agreeing to fund the CRs’ trip to the CCR conference in early April, which will let the chapter “network with individuals that share their harmful views.”

The statement made clear the legislative branch wanted to retaliate against a group funded by student fees because of its protected First Amendment expression, an action that has been struck down in court as unconstitutional when applied to public universities:

Members of the senate believe that we should not tolerate or support any individual or organization that perpetuates hate speech on our campus. Direct endangerment of any kind should be condemned on this campus.

Senators asked students to attend an April 4 Senate meeting to discuss “financial bylaw changes that will prohibit student fees from funding partisan organizations on campus, a policy implemented on other UC campuses.” The meeting would also discuss a resolution that provides “a formal timeline of the violent actions committed” by the CRs and other entities.

In its statement sent to The College Fix Monday, but dated Sunday, the CCRs don’t say what the results were of that April 4 meeting. It’s not listed on ASUCM’s website or Twitter feed either.

But the statement says the legislative branch is encouraging students to support “a measure that has yet to be approved for defunding partisan clubs on campus in response.”

The CCRs said the pro-ICE tabling by its chapter was an example of “normal conservative beliefs and having respect for law enforcement,” and said any attempt to defund the chapter was an “explicitly biassed [sic] attack against conservative values and ideas”:

The freedom to voice these ideas under our First Amendment rights is a principle we are determined to fight for on behalf of all Americans. It is an abuse of the office and institution for administrators and student governments to shame students for being conservative. Any repercussive actions by UC Merced student government or campus administration is an assault on First Amendment rights, and we unequivocally support CRUCM in their battle against campus bias for maintaining funding for their organization.

A spokesperson for the CCRs told The Fix Monday that the group is late responding to last month’s events because the campus chapter “just made us aware of this news; they were attempting to fight back on their own.”

He wrote in an email that the administration is “still actively looking into sanctions against the club as we were last made aware.” The chapter told the state group that ASUCM “has yet to update any recent meeting minutes online or otherwise, including the April 4th meeting.”

Treasurer Johnathon Turner of the CR chapter said in the CCRs statement that UC-Merced “paints a false picture of the club” by claiming that “peacefully” holding a sign is “violent”:

Words and beliefs cannot hurt you, and we believe we have the same rights as any other student to express whatever beliefs we may hold. The only thing that is in danger from our Republican beliefs is the atmosphere of leftist indoctrination present on our campus.