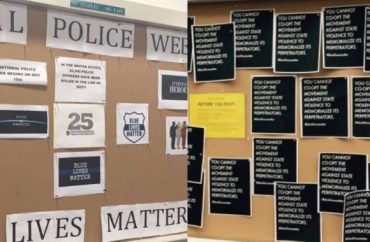 A #BlueLivesMatter poster display at Dartmouth College showing support for law enforcement and remembering those who lost their lives in the Sept. 11 terrorist attacks was torn down by student activists, who then posted Black Lives Matters propaganda while administrators essentially allowed the vandalism to occur — and stay up, The Dartmouth Review reports.

The Dartmouth College Republicans had created the Blue Lives Matter display in honor of National Police Week. But the display on Friday was ripped down and replaced by several posters that read “You cannot co-opt the movement against state violence to memorialize its perpetrators. #blacklivesmatter.”

One student activist, on Twitter, had called the display “white supremacist bullshit.”

Meanwhile, on the same day that the dispute took place at Dartmouth, two police in nearby Manchester were shot while on duty, the Daily Caller reports. One officer was treated and released. The other remains hospitalized in stable condition with gunshot wounds to the face and torso, ABC News reports.

A statement from the Dartmouth College Republicans emailed to the campus community denounced their feckless campus leaders for not defending their pro-police display and showing hypocrisy against conservative students:

Today our freedom of speech was violated by our fellow students while the administration stood idly by. We spent three weeks getting our poster remembering fallen men and women of law enforcement approved through the proper administrative channels. Almost as soon as it was posted in the Collis Center for Student Involvement, it was torn down and replaced with Black Lives Matter posters. Parkhurst was unwilling to remove the posters as it was afraid of taking a political stance. There is, however, nothing political about standing up for freedom of speech, our First Amendment right.

While we wholeheartedly stand behind our message, whether the College agrees with us or not should not have an effect on its response. Unfortunately, it clearly has. When Black Lives Matter’s t-shirt display was previously vandalized, the school quickly and appropriately responded with an email condemning the violation of freedom of speech. President Hanlon spoke of creating a “safe space” for students to express their opinions. He wrote that Dartmouth “strive[s] to balance freedom of speech with strong community values of civil discourse.” President Hanlon continued, “at their core, institutions of higher education are places where open inquiry and the free debate about difficult and sometimes uncomfortable ideas must thrive.”

Yet, when it came time to enforcing these protections for students on the other side of the political spectrum, there was only deafening silence. In fact, after much discussion, we were told by Safety & Security and Collis leadership that restoring our display would put us in violation of College policy and that we would be subject to punishment by Dartmouth Judicial Affairs. While our posters were kept off the bulletin boards (at least until 2 AM when Collis closes), theirs were allowed to remain unchecked with no repercussions. In fact, they were given expedited permission to have their posters placed in Collis. This group was granted approval within hours, while we had to schedule almost a month in advance.

A student who vandalized the display told The Dartmouth campus newspaper that they were justified in their actions, that the Blue Lives Matter display amounted to violence against students of color. “It was taken down by students and replaced because it actively co-opted a movement that is supposed to comment on police brutality against black individuals in this country,” the student said. “It took that and by framing that as ‘Blue Lives Matter,’ it normalizes and naturalizes violence against people of color in this country. And that is not okay. That is in no way okay.”

The Dartmouth Review also reports that the Campus Black Lives Matter protesters distributed an email to the campus community which stated in part that the Blue Lives Matter slogan “denies that black bodies are subjected to disproportionate state violence. This has nothing to do with individual police officers.”

We have reclaimed the board. We are reclaiming our space, in Collis, in Class, and on this Campus. We have proclaimed “Black Lives Matter”—we do in fact matter, and we are here.

Fuck your comfort, there is no such thing as neutral existence. Sitting in the library with your headphones in, intensifies this violence against people of color, muting the voices of the movement, the cries of your peers, and the history of inequality. Posting Blue Lives Matter reproduces the idea that All lives matter, again intensifying the violence against people of color. Invalidating individual realities.

We occupy this space, in front of the bulletin board, to guarantee our presence at this institution. Reposting Blue Lives Matter reproduces this violent narrative against people of color, by silencing us. We will not be silenced.