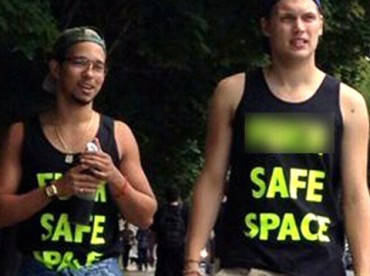 Carleton University in Canada has pledged to issue “sanctions” against students – some of them orientation team leaders – who were photographed wearing shirts that said “F**k Safe Space” at an off-campus rally.

The photos surfaced online Sunday and spread quickly, with social media users speculating that the shirts – worn by both men and women – were a protest against the university’s policy of banning curse words during orientation week.

The Charlatan, Carleton’s independent student weekly, quoted one student “facilitator” who said the shirts were intended as “a statement against the coddling of first year students” evident in the swearing policy.

I get that the no swearing thing is condescending and stupid, but let’s not associate it with attempts at campus inclusivity. #FuckSafeSpace

The wording refers to the school’s Safe Space Program, which Carleton describes as an “interactive workshop designed to reduce homophobia and heterosexism on campus and to increase the visibility of supportive people and positive spaces for the GLBTQ community on campus.”

Functioning similarly to the speech codes common in U.S. universities, the 10-year-old Carleton program says students should feel free from all forms of discrimination while on campus — including speech that could be perceived as offensive.

The administration did a quick investigation, with President Roseann O’Reilly Runte saying Monday that “some” of the students were “orientation facilitators” but the off-campus gathering wasn’t officially part of orientation week.

“Sanctions will be issued subsequent to individual meetings” with the offending students, Runte said. The school “remains committed” to ensuring “safe spaces for all and an inclusive educational environment,” she said. The Ottawa Citizen reported that “as many as 16” students are facing sanctions.

Orientation team leaders apologized for dawning such gauche attire in a statement Monday, also posted as a university news release, blaming the incident on “the misguided actions of a small group of students.”

“While our intentions were not to harm or disrespect anyone, the T-shirts in question were without a doubt inappropriate, inconsiderate, offensive and disgraceful,” the statement said. “It pains us to know that we have tarnished the name of our institution and the hard work of thousands of students, staff and faculty in creating a safe and inclusive environment.”

The offending students “have committed to engage in community service” on and off campus throughout the year, team leaders said. It wasn’t clear if community service was what the school meant by “sanctions.”

Carleton isn’t alone among Canadian universities in its actions against offensive speech in the name of protecting the student body.

The Gazette at the University of Western Ontario scrubbed from its website an Aug. 19 editorial titled “So You Want to Date a Teaching Assistant” following an uproar.

The pre-scrubbed editorial gave tongue-in-cheek suggestions on the best tactics to use to procure dates with teaching assistants, including stalking them on Facebook, dropping in on their tutorials and showing due diligence in coursework, according to Reason.

The union representing TAs and postdoc students wrote a blistering letter in response that admonished The Gazette for penning “a guide on how to sexually harass another human being, face potential expulsion from Western for violating its Student Code of Conduct or worse still, end up in court over a criminal matter.”

“The time is long past when these kinds of articles can be defended as being either satire or humorous,” when it in fact promotes “inappropriate relationships” between TAs and students, Western’s provost wrote in a letter to the editor to The Gazette.

“It is my hope that The Gazette leadership will learn from the negative reaction to this particular column and, in future, show more consideration and respect for graduate teaching assistants and others who are dedicated to providing the best educational opportunities for Western students,” the letter said.