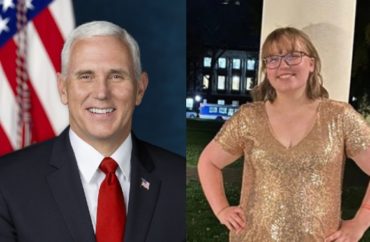 A student at the University of Virginia wants the administration to understand the harm that “LGBTQ+ students” face if former Vice President Mike Pence is allowed to speak on campus.

“Pence’s presence should not be welcomed, nor should the University allow speakers on Grounds who deny the full humanity of all students,” student Elisabeth Bass (pictured) wrote in an opinion piece for The Cavalier Daily.

Young Americans for Freedom is scheduled to host him on April 12.

Bass said Pence is “notoriously homophobic” and cited different actions he took as a U.S. House Representative, including his sponsorship of “an amendment to the Constitution seeking to define marriage as a union between one woman and one man.”

Bass also took issue with Pence’s association with the Heritage Foundation where he is a presidential fellow, because it also holds conservative views on LGBT issues.

She said UVA is also a tough place for lesbians like her, because the university allows Christian groups on campus to exclude homosexuals from leadership positions. “Mike Pence coming to speak will only make that worse — he should not be invited,” she reiterated.

His presence on campus could lead even to suicides, she said.

I bring up my personal experience [as a lesbian on campus] because I want to emphasize that there are students on Grounds deeply impacted by the decision made by YAF to invite Pence to speak. Nearly a third of gay young people have attempted suicide. It is important to discuss why this occurs. It has been found that gay individuals often attempt suicide due to discrimination and bullying. Actions taken by politicians, like Pence, create discriminatory situations that can lead to gay individuals struggling. It is important to consider how serious inviting someone like Pence to speak at the University is and think about how LGBTQ+ students will be affected.

The freshman student isn’t opposed to all debate — she said students should be free to disagree about “our favorite dining hall, or more political arguments like tax policy.”
But not the “humanity” of “LGBTQ+ students.”

“The community of trust begins with respecting and welcoming all students,” Bass said. “This can start with YAF rescinding its offer for Pence to speak.”