If you’re like fictional mustachioed soccer coach Ted Lasso and subscribe to “Rom-Communism,” you likely know how difficult it is for women to find a suitable mate. Many of the best rom-coms hinge on the idea that the perfect man doesn’t exist, until – *poof* – he suddenly does.

But in an increasing number of ways, today’s dating scene is beginning to resemble rom-coms, and it’s neither romantic nor funny. Dateable men are going the way of the iPod, hard to find and even more difficult to keep.

Earlier this month, a Pew Research study found that an increasing number of Americans are living without either a spouse or a partner. In 1990, 71 percent of U.S. citizens were either married (67 percent) or cohabitating (4 percent). But by 2019, that number had dropped to 62 percent, with only 53 percent of Americans living with a spouse.

Another sobering statistic may suggest the answer as to why Americans are so alone, and it points to the behavior of single men. Both employment and income among single men between ages 25 and 54 has dropped in the past 30 years, and slightly more than three-in-ten unpartnered men are still living in their parents’ homes.

A primary driver of this phenomenon appears to be the mass exodus of males from colleges and universities, which harms their future earning potential, and, consequently, their dateability.

According to the Wall Street Journal, U.S. colleges now host 1.5 million fewer students than five years ago, and males have made up 71 percent of the drop. Women now make up about 60 percent of all college students, while men are at a record-low 40 percent.

But why are men treating college like jury duty?

For one, greater numbers of young men appear to be losing their taste for employment generally, which lessens their desire to get an education.

According to a 2017 National Bureau of Economic Research working paper, men between the ages of 21 and 30 exhibited a dramatic drop in work hours compared to their older counterparts; the study’s data showed these young men “shifted their leisure to video gaming and other recreational computer activities” in lieu of working.

Another 2006 NBER study also noted some demonstrable differences between males and females in their formative years. The study noted that boys are more likely to have behavioral problems that lead to disciplinary actions in school. In many cases, these behaviors turn criminal, which can derail dreams of attending college and getting well-paying jobs. (The Wall Street Journal story cites “videogames, pornography, increased fatherlessness and cases of overdiagnosis of boyhood restlessness and related medications,” as factors.)

And, of course, without putting too fine of a point on it, men may be dropping out of the live dating scene because they can find a lot of the benefits they would find in a live relationship without having to leave their computers.

But there is good news that ought to incentivize men to once again join the ranks of the employable and dateable. Pew found that if you’re a man who has completed a bachelor’s degree, the chance you would find a partner grew from 27 percent in 1990 to 37 percent in 2019. And if you were partnered, your income grew by nearly $4,000 in 2019 adjusted dollars during that time. 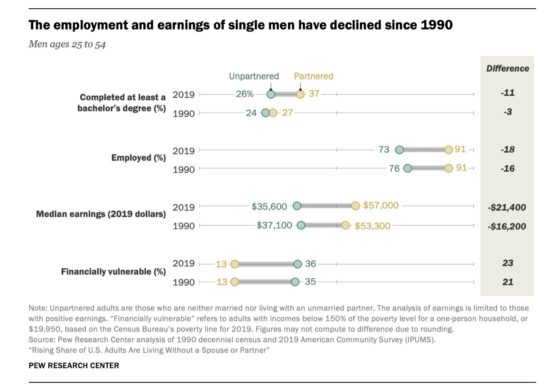 That isn’t to say, of course, one can’t be a great boyfriend or husband without having gone to college. Most of us probably have stories of lumberjacks or carpenters in our lineage who may not even have had a high school diploma but ended up creating strong families.

But many good-paying jobs didn’t require a college degree in the 19th and 20th centuries. As more professions now require a diploma, more men are being left behind, making them less attractive mates.

One of the tenets of “rom-communism” is a strong belief that in the end, no matter how bleak things look, everything will work out – just like they do in the movies. But right now, the pool of men eligible for marriage looks more like a kiddie pool, full of adult boys that refuse to grow up.