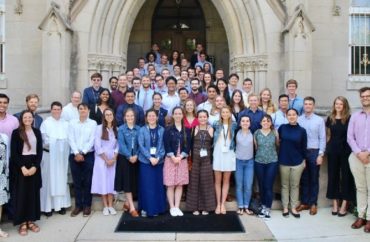 A religious order continues to expand its outreach onto college campuses with a popular program that involves learning about the thinkers of the Catholic Church and thinking about important moral questions.

The Thomistic Institute chapters are run through the Dominican House of Studies located in D.C.

“We exist to strengthen the intellectual formation of Christians, primarily at universities but also more broadly speaking in the Church and public square,” spokesman Caleb Whitmer told The College Fix via email.

Since 2015, the Thomistic Institute has created over 80 chapters at universities and college campuses both in the US as well as internationally.

This has not stopped the Thomistic Institute from teaching students the “thought of giants like Thomas Aquinas, Augustine, the Church Fathers, St. Paul, the Schoolmen, John Henry Newman, and many others,” Whitmer told The Fix.

Through the guidance of the Thomistic Institute, chapter leaders “organize lectures and reading groups on the Catholic intellectual tradition, specifically on themes like happiness, virtue, the meaning of life, the existence of God, the relationship between science and faith, and many others.”

Just last year, these 80 plus chapters and their student leaders held over 220 lectures and 70 reading groups. To support the students, the Thomistic Institute created its first ever study abroad program in Rome this spring and just a few years ago created an Rite of Christian Initiation of Adults program for people looking to convert.

These programs tied with their YouTube series “Aquinas 101” which has over 70,000 subscribers and 5 million views for its 150 videos, has helped the institute fulfill its mission of educating college students on the intellectual tradition of the Catholic Church.

In addition, the institute will continue to help “chapters…organize lectures, reading groups, and intellectual retreats for the fall,” Whitmer stated.

One of the speakers and facilitators of these reading groups is Angela Knobel, an associate professor of philosophy at the University of Dallas and an Aquinas scholar.

In September she will hold bi-weekly online discussions on “Aquinas and the Infused Moral Virtues” as well as lecture for the University of Tulsa’s Chapter on “The Philosophy of the Abortion Debate.”

Knobel told The Fix that she chooses to teach for the Thomistic Institute because she believes in their mission to help students who do not have the opportunity to “connect with their faith in an intellectually rigorous way.”

“There are many exciting and interesting questions: is it rational to believe in God? Is there a God? What is virtue? What does it mean to be happy?” she told The Fix, even if a student is not Catholic or Protestant.

“In years of working with the TI, I have found that there is a genuine hunger for such discussions,” Knobel told The Fix. “I think the rapid growth of the TI is itself a testament to that hunger.”

The group has had success at Baptist, public and Ivy League universities as well.

Alexander Pruss, the director of graduate studies and professor of philosophy at Baylor University, concurred with Knobel’s statements.

“There is something particularly fitting about a university having student groups whose primary charter is to promote interdisciplinary intellectual conversation of a high philosophical caliber about the most important questions in human life,” Pruss told The College Fix.

He has spoken on these issues for the Thomistic chapter at Baylor as well as at Texas A&M and Harvard.

Pruss told The Fix that it is important that students discuss these questions because these “students are at a time of their lives where these questions are particularly crucial to address, and not everyone is able to take classes on them.”

The Thomistic Institute continues to provide this opportunity to students because they know this education can transform lives.

For some, that has meant marriage, according to Whitmer, the institute’s spokesman. For others, like Martina Bucheli, a University of Virginia graduate, that means entering the Nashville Dominicans this month.

She is seeking to enter the Dominican Sisters of St. Cecilia Congregation in Nashville this August due to the influence of the Thomistic and Dominican intellectual tradition on her life.

“I will continue studies in philosophy and theology according to the Thomistic tradition and eventually teach in missions around the world,” Bucheli stated in a profile piece by the university about her architecture research.