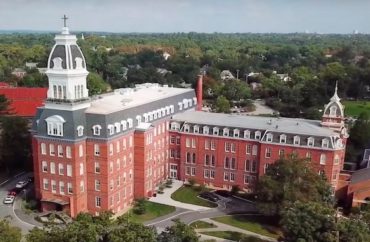 The event is purportedly being ‘amended,’ but officials won’t say how

A Catholic university in Maryland is hosting an event “celebrat[ing] the power of women and girls” that will feature a host of pro-abortion-rights and gay activist speakers, including several dissident nuns, along with the former president of Planned Parenthood and a former affiliate of the pro-abortion group NARAL.

The “WOW – Women of the World Festival” is billed as “presented by Notre Dame of Maryland University.” The event, which occurs this weekend, will take place at Baltimore’s Columbus Center.

The conservative student group TFP Student Action last week sharply criticized the event, pointing out many of its speakers have expressed and advocated beliefs directly in opposition to some of the fundamental teachings of the Catholic church. Its featured speaker list includes journalist Soledad O’Brien, former Planned Parenthood president Cecile Richards, and actress Amber Tamblyn.

Richards, as the president of Planned Parenthood for 12 years, has been a vocal advocate for abortion for much of her professional life. Tamblyn, meanwhile, has spoken approvingly about abortion, including her own experience having one.

Another speaker, Vanessa Geffrard, is part of the leadership team of Planned Parenthood of Maryland, where she works as the vice president of education and outreach.

As of Tuesday afternoon, TFP Student Action’s petition urging the university to dump the controversial speakers had garnered nearly 14,000 signatures.

The school is remaining silent on the matter. Campus spokesman Christian Kendzierski did not respond to emails and a phone call on Tuesday seeking information about the event. Festival officials also did not respond to a query sent to the event’s email address.

The College Fix also reached out to Sean Caine, a spokesman for the Archdiocese of Baltimore. Caine said the school does not fall under the authority of the archdiocese but rather is run by the School Sisters of Notre Dame, a Catholic religious group. He added that the event “is scheduled to take place at a non-Catholic institution.”

Caine also intimated that the program was undergoing a change of some sort. “We just recently became aware of the program. It is our understanding that the program is being amended,” he told The Fix. He did not respond to two followup emails on Tuesday asking for more information.

The event page was not noticeably altered in any way on Tuesday evening; it still touts the program as being “presented by Notre Dame of Maryland University.”

On its website, Notre Dame of Maryland University appears to downplay its Catholic heritage. On its “Mission & Social Responsibility” page, it only mentions its Catholic roots in relation to its educational programs. (The “Constitution of the School Sisters of Notre Dame” does declare that the nuns who run the university seek to “proclaim the good news as School Sisters of Notre Dame, directing our entire lives toward that oneness for which Jesus Christ was sent.”)

Guests opposed to fundamental church teachings are not new at the Women of the World event. 2018’s program featured keynote speakers Roxanne Gay and Tarana Burke, both outspoken advocates of abortion rights.

Women of the World has been around since March of 2011, according to Facebook records, and first came to Baltimore in 2012.