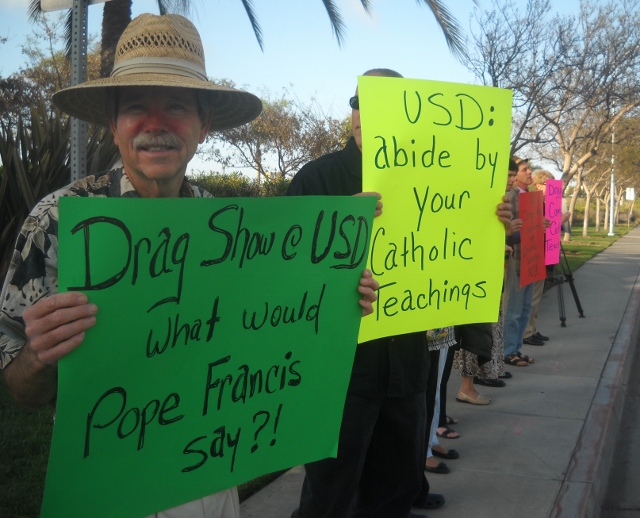 SAN DIEGO – The University of San Diego – a large, private Catholic college – hosted a drag show in its campus theater Thursday night, prompting a protest by students and local residents who called the event an aberration to Catholicism’s values, while others on campus defended the performance.

“A drag show is not consistent with Catholic teaching,” student protestor and sophomore Ailsa Tirado, 20, said in an interview with The College Fix. “Why call yourself a Catholic school? It’s in direct contradiction with explicit Catholic moral teaching.”

Tirado said more than 4,000 students across the nation signed a petition against “Celebration of Gender Expression – Supreme Drag Superstar 2,” which was organized by PRIDE, the college’s lesbian, gay, bisexual, transgender and queer student-support group.

Tirado and about two dozen others students and local Catholic residents said the rosary on campus while the drag show took place. About a dozen adult protestors also lined the entrance to the campus before the show started.

But at least at the school, protestors were in the minority, as Thursday’s performance sold-out the Shiley Theatre, the campus’ largest auditorium – which happens to be situated next to the university’s Sacred Heart Hall.

It’s the second consecutive year the university has hosted the show. Posters advertising the event that peppered the campus boasted bright, glossy red lips and a Vegas-inspired font, an image that looked starkly out of place next to statues of the Virgin Mary and ornate white buildings adorned with large crosses.

The performance starred Manila Luzon, described on his personal website as an “Asian Glamasaurus” drag queen who can been seen with his/her boyfriend around New York City “at the gayest of spots holding each other’s hands and each other’s drinks.” Before the show began, Luzon stood outside the building in which the theater is located, and where several San Diego news station cameras rolled. He donned a cherry-red kimono-styled dress and Asian-inspired make-up and laughed and chatted with students.

Social media posts Luzon made prior to his show included “If I had as many people buying my songs on iTunes as I have people signing petitions for me not to perform at a Catholic university, then I’d have enough money to pay for a gay wedding” and “Jesus is really mad I’m performing at University of San Diego.”

Protestors, in a flier emailed among members of the San Diego Catholic community, lodged their concerns over Luzon because he is “openly homosexual” and because of his “vocal support of same-sex marriage.”

But Pamela Payton, the school’s assistant vice president of public affairs, defended the performance in an emailed statement to The College Fix, saying “the event supports the church’s teaching on the dignity of the human person and does not promote either behavior or lifestyle that is contrary to the teachings of the church.”

About five police officers and twice as many campus security guards manned not only the front entrance to the building in which the theatre is located, but also stood guard at its side entrance and inside the lobby that leads to the auditorium.

Numerous signs posted on the walls and buildings stated “no cameras, no recording devices” and “private event.” A campus security guard, flanked by nearby police officers, also gave students a verbal warning against recording devices as they entered the first doorway into the building.

Student identifications were requested, and a campus security guard even checked students’ backpacks and purses with a flashlight to verify they were not sneaking in anything that could record the performance.

Yet, campus leaders say they don’t have a problem with the show.

“The event complies with the same rules and protocols applied to all other sanctioned campus events planned and carried out by students at USD,” Payton stated.

She did not respond to a follow-up question asking for a reaction to the protest, but Lori Watson, director of women’s and gender studies at the university, said in an interview with The College Fix that while protestors have every right to lodge their concerns, PRIDE has every right to host the event on campus.

She acknowledged the University of San Diego is a Catholic college, but she said dogma doesn’t trump all else.

“The university is not a church,” she said in a telephone interview. “Its mission is not to indoctrinate students to a particular viewpoint. We have students of all faiths represented on this campus. … Our mission is primarily educational.”

She added the university’s mission statement “expresses a commitment to the value of inclusivity and respect for all humans.”

“Those who oppose the event obviously think one can’t allow such an event to occur in the context of a catholic university, but I think part of our educational mission is to provide a context in which multiple and diverse and often conflicting points of view are heard,” Watson said.

The drag show also punctuates a larger, ongoing debate at the school over same-sex marriage.

Last fall, the university’s president, Mary Lyons, rescinded the invitation for a guest lecture after it came to light that the slated speaker, Tina Beattie, publicly supported same-sex marriage. The decision prompted a small portion of the college’s faculty to cast a no-confidence vote against Lyons, as well as made national headlines.

Watch a video of students and other local Catholics saying the rosary as a drag show takes place in a theater nearby on the University of San Diego campus:

005 from The College Fix on Vimeo.

Watch a video of some of the strict measures campus officials undertook to ensure the drag show is not recorded. Shown in this video is the first entrance in which a verbal warning is given to students not to bring in recording devices. At a secondary entrance in the theater lobby, purses and bags were checked with a flashlight. Several police officers and campus security guards also flanked the entire operation.

003 from The College Fix on Vimeo.