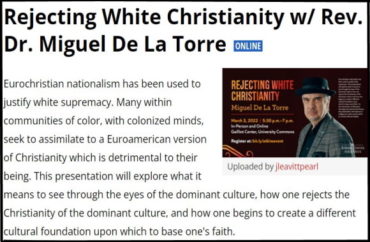 ‘The job I try to accomplish in my writings is to try to get people to embrace the hopelessness and realize we have nothing to lose,’ Professor Miguel De La Torre said

Carlow University recently hosted an event on “Rejecting White Christianity” that featured a speaker who argued white people should “crucify their whiteness,” called for the embrace of “hopelessness,” and urged people to “ethically lie” to make right for past wrongs.

The speech prompted a Catholic watchdog group to protest the event as antithetical to the Pittsburgh-based private Catholic university’s identity.

The March 3 event was sponsored by Carlow’s Atkins Center for Ethics and featured Miguel De La Torre, professor of social ethics and Latinx studies at the Iliff School of Theology in Denver, Colorado.

De La Torre began his presentation by lambasting evangelicals who voted for Donald Trump, according to a video of the speech.

“When eight out of ten white evangelicals voted for a person who is completely against everything Christianity stands for, I don’t know what Christianity they are practicing,” he said. “But I want nothing to do with that Christianity.”

He then distinguished “white theology and ethics” from “Latinx ethics” and noted that the term white does not refer to skin pigmentation but is an “ontological concept.”

“Those of us who are colored, some of us can also be white. But the good news is there is salvation,” he said. Later, he explained that this salvation means “we [who are colored] have to crucify our colonized minds, and for our white brothers and sisters, they need to crucify their whiteness.”

Torre’s speech focused on the idea of “hope,” which he rejected and characterized as a white concept.

“We embrace Euro-centric concepts like hope because it helps to pacify the oppressed during their oppression,” he said. “It leads to spiritual liberation, and ignores physical liberation.”

Raising the possible objection that hope is a “gift of the spirit,” De La Torre said his definition of hope is different.

He called hope “a middle-class excuse to do nothing.”

While De La Torre rejected a definition of hope that involves waiting, hope in the Bible is often tied to waiting. Specifically, as Psalm 130:5 states, it is tied to waiting on God:

“I wait for the Lord, my whole being waits, and in his word I put my hope.”

The Apostle Paul also rooted the concept of hope in salvation through Christ’s atoning death on the cross for sin, declaring that this hope “does not put us to shame.” He wrote in Romans 5:2-5:

“Through him we have also obtained access by faith into this grace in which we stand, and we rejoiced in hope of the glory of God. Not only that, but we rejoice in our sufferings, knowing that suffering produces endurance, and endurance produces character, and character produces hope, and hope does not put us to shame, because God’s love has been poured into our hearts through the Holy Spirit who has been given to us.”

But De La Torre argued that true character—understanding systemic oppression—produces hopelessness. He concluded his talk by urging the audience to realize that “embracing hopelessness is to be propelled forward into practice and action.”

Action for De La Torre means using what he called a “trickster ethic” to transform society.

The ethic covers things like “how to ethically lie so we can discover what is true, how to ethically steal so we can feed those who are hungry…[and] how to disrupt the structures that have trained us to oppress ourselves and to take upon our body our own discipline,” he said.

“This empire was built on stolen resources and cheap labor,” De La Torre said. “So hospitality is really the wrong word. What we need is restitution…By seeing this dilemma through the eyes of the margin, we come to a very different understanding of what the Christian response should be.”

Where is God in all of this? De La Torre answered the question by saying he is “not a theologian” and is therefore more interested in “dealing with what’s going on than trying to figure out the theology.”

De La Torre’s “rejection of what he calls ‘white Christianity’ is a rejection of Catholicism,” Domenick Galatolo wrote for TFP Student Action. “He advocates the overturning of order and morals by violent means.”

De La Torre did not respond to a request for comment from The College Fix.

Carlow bills itself as a “private, co-educational, Catholic liberal arts university” with a “strong commitment to social justice, ethical forward-thinking leadership and meaningful service to the community that makes an impact.”

Sean McFarland, Carlow University Public Relations & Communications Manager, told The College Fix that “viewpoints of lecturers should not be taken as either an endorsement or opposition of how the University feels about a particular issue.”

“Rather, the intent of our university’s liberal arts tradition is to expose students to a variety of worldly perspectives and encourage them to think critically and individually on how they feel about the topic(s) in question,” McFarland said.

“Carlow University is proud of our Catholic heritage and mercy mission, which welcomes all. As such, the University welcomes respectful discourse and multiple perspectives, including being open to hosting speakers like Dr. De La Torre whose topic may engender thoughtful reflection and dialogue.”

MORE: UCSB teaching assistant says he would ‘assassinate Jesus’ if he had a time machine