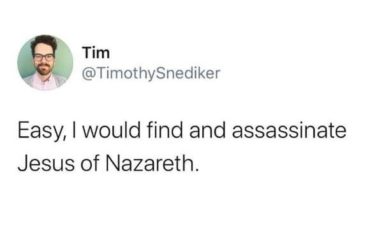 Tim Snediker, who is also a doctoral student in religious studies at the public university in California, tweeted late Sunday night that he would “assassinate Jesus of Nazareth” if he had a time machine.

In a follow-up tweet, he said he would also consider “murdering him before his baptism.”

Both tweets have since been deleted along with Snediker’s Twitter account. Before deleting his account, he changed his profile to say “Tim has repented, now he wants to save Jesus.”

Rod Dreher, a conservative writer, tweeted screenshots of the tweet and wrote “If you go to his faculty page, you’ll see the department statement backing BLM. It says that the study of religion teaches that ‘human life is holy because God is holy.’ Hmm…”

Religious Studies at University of California Santa Barbara. If you go to his faculty page, you'll see the department statement backing BLM. It says that the study of religion teaches that "human life is holy because God is holy." Hmm… https://t.co/Y11lflKdEe

Taylor Brown, a doctoral student at Baylor, tweeted: “This ‘joke’ that Tim Snediker made is really gross. Even if you’re not religious it’s not funny. I’m a Christian and I’d never make a ‘joke’ about time-traveling to kill Muhammad, or Siddartha Gautama, or the Baal Shem Tov. You don’t have to be religious to be respectful or kind.”

Snediker did not respond to several requests for comment from The College Fix.

UC Santa Barbara did not respond to multiple requests for comment on Snediker’s tweets or if it felt that Christian students under Snediker’s tutelage could feel alienated by his comments.

Snediker’s department profile says he has an interest in psychoanalysis, political theology, and philosophy of religion.

While the university did not respond to a request for comment, the religious studies department does take a strong stance on Black Lives Matter. It said the department supports Black Lives Matter and called the killing of George Floyd another example of institutional racism.

“It is both a reminder of the anti-Blackness embedded in our society and an example of the systemic institutional brutality directed towards minoritized communities,” its website states.

The religious studies department at UC Santa Barbara previously faced criticism from a Hindu group for its portrayal of a Hindu goddess.