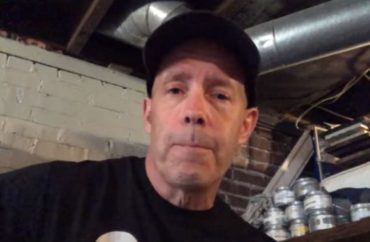 Award-winning Professor James Spiegel taught philosophy and religion for 27 Years at Taylor University before he was abruptly fired recently for refusing to take down his “Little Hitler” music video on his personal YouTube account.

It occured after a fellow faculty member lodged a harassment complaint over the song.

Spiegel is one of Taylor University’s most published and decorated scholars, having won prestigious awards at the private, Indiana-based Christian university, including for excellence and leadership.

On August 16, the veteran educator uploaded his comical “Little Hitler” video to his personal YouTube account. In the video, Spiegel plays on his guitar and sings his original song, in which he explains the tendencies of innate sin, which to Christians is the belief that people are born in a morally corrupt state due to Adam’s original sin.

Since 2010, Spiegel has performed this song here and there to students and faculty, including at a chapel service and even a faculty retreat, he told The College Fix via email. He said he’s never received any complaints — until now.

On August 19, Michael Hammond, the university’s provost, reached out to him in an email to demand he remove the video. The professor refused to take it down.

A day later, Spiegel met with Hammond and Taylor’s Dean of Arts and Humanities Thomas Jones to discuss the matter, Spiegel told The Fix, adding they insisted the video lacked the proper context to ensure it is not misinterpreted.

He added that they argued that “times have changed” since he performed “Little Hitler” in chapel and that “people are more sensitive now.” They also told Spiegel someone had lodged some sort of complaint over the video.

The next day, Spiegel attached an explanation of the song to his YouTube video:

Many years ago, while hiking in Colorado Springs, I came across a group of campers where a folk singer was singing song after song which exalted human nature in the most grandiose terms. I was struck by how the singer and his songs did not recognize that humans have a fundamental moral problem, what theologians call a “sin nature.” It was in response to this that I wrote “Little Hitler”—as a theological corrective to such unabashed (and dangerous) humanism. In this video I perform the song with the same corny exuberance that that folk singer displayed.

The addition did not appease his superiors. He was fired August 24.

“Hammond accused him of ‘insubordination’ and claimed that his ‘lack of regard for how [his] words are perceived and may affect others … demonstrate [his] lack of interest in participation in the spiritual community of Taylor University,’” the New York Post reports.

Spiegel told The Fix he was also told “my pay would be stopped after that week’s paycheck and I no longer have health insurance.” He added administration had never warned him that his job was on the line.

During this meeting, Spiegel said he was informed that the complaint was actually a harassment charge filed against him by a fellow faculty member over the video.

“The video was not targeted at anyone specifically. I did not email the video link to any TU faculty members, and I only texted the link to a few close friends and family members,” Spiegel told The College Fix.

Spiegel said he was not informed of the complainant’s identity, and by not allowing him to speak with the faculty member who complained, the school violated its own protocol.

Under its “Responsibilities for Community” section, it requires the offended and alleged offender to attempt to reconcile:

Additionally, Spiegel said that Taylor also violated the university’s Master Policy Manual, which he says defines harassment as “unwelcome, hostile, or inappropriate conduct directed toward an individual because of his or her protected class.”

Spiegel told The College Fix that the point of view presented in his video is not nearly as controversial as some of the opinions publicly presented by other Taylor University faculty members.

“A number of faculty have posted things on social media which demonstrate their support of BLM and other controversial political stances,” Spiegel said.

“I am not saying that this is wrong of them to do or that they should be censored by the university for doing so. My point is, why would they come after me to censor a song which is far less controversial than what some of my colleagues are doing?”

In response to an email inquiry, the director of media relations at Taylor University, James Garringer, forwarded The College Fix a letter to the university faculty dated September 1, written by Hammond, Jones, and the university’s interim president, Paige Comstock Cunningham, and chair of the board of trustees, Chris Goeglein.

In it, the administration denied that the firing was politically motivated, or that they were trying to “cancel” Professor Spiegel.

The letter states that Taylor University stayed true to its Christian values and did not attempt to squelch Spiegel’s freedom of speech. The letter also claims the administration followed proper protocol in the process of Spiegel’s termination.

“Just as we as individuals are all called to seek restoration of damaged relationships, the biblical principles embodied in Taylor’s Life Together Covenant compel us to do the same corporately within the University,” the letter states. “That process was followed, engaging faculty leadership, the academic department, and the administration seeking to restore what was damaged. In this case restoration was not possible.”

“The commitment we have all made to one another is to understand, acknowledge and accept that while employed by Taylor, our views must be expressed in accordance with our biblically-based community standards,” the letter continued.

The letter does not explain on what grounds Spiegel was terminated, stating that it goes against protocol to discuss “personnel matters.”

Spiegel told The College Fix that “the administrators’ refusal to openly discuss details related to my case opens the door to all sorts of slanderous rumors, and this is very concerning to me.”

Yet, Spiegel said he believes that not acquiescing to the school’s demands and keeping his video up was the right thing to do.

“To comply with the demand to take down the video would be complicity with an immoral act—violating free speech which is in no way harmful, threatening, or otherwise morally inappropriate,” he said.

At stake, he said, is “academic freedom, artistic freedom, the concept of faculty tenure, and the integrity of the Taylor University leadership.”

“Compliance to the demand to remove the video would also dangerously encourage TU administrators to censor other TU faculty’s creative works in similarly arbitrary and inappropriate ways.”

He told The College Fix that much of the college community has supported him after his sudden termination.

“My family and I have been overwhelmed with support from TU faculty, staff, students, and alumni and even people who have no direct connection to the Taylor community,” Spiegel said. “Apparently, many people see that there is more at stake here than a little music video and that the issues at stake transcend this particular university.”

Following the firing, several faculty members also submitted a letter to the administration in Spiegel’s defense, objecting to the method the school used to fire him.

MORE: Conservative prof says Baptist seminary used COVID as excuse to get rid of him