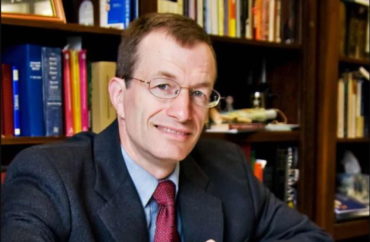 A seminary fired a professor for his repeated criticism of its leftward direction but used COVID-19 budget cuts as cover to hide its true motives, he claims.

Russell Fuller told The College Fix in an interview that Southern Baptist Theological Seminary is also requiring laid-off faculty to sign a nondisclosure agreement in order to receive their severance packages.

The professor of Old Testament interpretation had been at SBTS in Louisville, Kentucky for 22 years. The seminary notified Fuller on April 21, after moving its entire coursework online, that his position would be axed following a $16 million budget cut.

Fuller (above) said the significant budget shortfall led to the seminary sever ties with nine professors including himself. Their severance packages includes salary and benefits through the end of July, but Fuller is refusing to sign because of the NDA, which Fuller shared with The Fix.

It would forbid him from making “any public or private statements (whether oral or in writing) that are derogatory or damaging to Southern Seminary, or any of its administration, faculty or staff,” the document reads.

“They’re afraid I’m going to say some things about them that they don’t like,” Fuller told The Fix in a phone call. “I don’t think this is right.”

The institution, which is associated with the Southern Baptist Convention, has been seeking a reason to dismiss him due to criticism he has leveled against the provost and several professors, he claims: The severance package is “hush money.”

The Christian Coalition of America chapter in Trinity County, Texas, said Fuller was among “four of the remaining conservative professors” fired by the seminary. Fuller was the “only full-time” professor at SBTS to sign the Dallas Statement on Social Justice and the Gospel a year earlier, the group claimed.

Caleb Shaw, director of communications for the seminary, told The Fix in an email that “because this involves a personnel matter,” it will make “no direct comment.”

“SBTS stands without apology for the faith once for all delivered to the saints, to the authority of the Bible as the Word of God, the centrality of the gospel of Jesus Christ, and in absolute commitment to the Baptist Faith and Message 2000 and the Abstract of Principles,” Shaw told The Fix.

Fuller said his expressed concerns go back nearly two years. In an Aug. 8, 2018 letter he provided to The Fix, Fuller warned President Albert Mohler about the teachings of four faculty including Matthew Hall, who was appointed provost several months later.

The “post-modernism” writings of Jonathan Pennington, professor of New Testament interpretation, “jeopardize most attributes of scripture, particularly its sufficiency and perspicuity,” Fuller told Mohler, explaining that this was why he voted to deny Pennington a promotion.

Dominick Hernández has published writings indicating that that the Book of Job in the Bible is mythological, and that its “greatest contribution” is that it “‘dissent[s]’ from the biblical teaching of just retribution,” Fuller continued.

Hernández’s Twitter profile shows that he and Pennington maintain a close friendship. Neither responded to email inquiries from The Fix requesting a response to Fuller’s allegations.

The final concern was the teaching of “critical race theory” by Jarvis Williams and Hall, who would later become provost. Teaching this “far-left worldview” is “incompatible with sound doctrine,” Fuller claimed.

Hall declined to comment to The Fix, also citing “personnel matters.” He linked a November article he wrote entitled “The centrality of the gospel of Christ in racial reconciliation,” saying it “may prove clarifying to… your readers.”

In that article, Hall declares racism to be “fundamentally a sin problem” while also rejecting
critical race theory “and the ideological foundations that shape it, along with the proposals it offers for change,” as a violation of “Christian witness”:

In the big picture, it seems to me that CRT assumes a basic materialism, ignoring spiritual realities and, in particular, the truth that human beings are made in the image of God. It also seems to me to have a deficient teleology, one that sees history most basically as a contest between oppressors and the oppressed.

Williams did not respond to a request for comment.

In a follow up email to The Fix, Fuller said that Hall was “trying to walk back his critical race theory” and that the article was “another attempt to gloss over his CRT.”

“Although they are trying to correct old errors, they are making new ones,” Fuller told Mohler in the letter. “Their attempt to bring these conflicting worldviews together distorts and politicizes the gospel.”

In 2017, Mohler appointed Hall and Williams to a six-person committee that published a report the following year on “Slavery and Racism in the History of the Southern Baptist Theological Seminary.”

Fuller shared an official reprimand letter from his dean of theology, Hershael York, with The Fix. It was dated just eight days after his letter to Mohler.

York references a conversation with Fuller where they discussed the professor’s concerns about the four faculty and their writings. The dean said they also discussed Fuller’s “lack of kindness and collegiality” and the “need for disagreements with faculty to be conducted graciously without attributing words or concepts to the colleague that the colleague himself did not say.”

The letter also states that “faculty members are expected to observe the proximate levels of authority over them and not go directly to President Mohler with concerns” before going to York or the provost.

“This conduct requires correction in order to support the values and commitments we hold as a Christian institution,” York wrote, before indicating that repeated offenses “may result in corrective or disciplinary action, up to and including termination.”

It was this outspokenness that Fuller says led to his termination, not COVID-19 related budget cuts, but the professor makes clear that he won’t be intimidated into silence.

“I spoke out against these things when I was an employee, and I [will] speak out about these things after I leave,” Fuller told The Fix in an email.

“If something is going on that’s wrong, don’t we have a duty as Christians to speak up about it?” he wondered in a phone call. Fuller rhetorically asked the seminary “what do you have to hide?” and called the NDA “a thing to shut me up so I don’t do what I’m doing now.”

In the past 20 years, SBTS, the Southern Baptist Convention and other seminaries have made a dramatic shift to the left, according to Fuller: “We’ve got to make a change in the convention and in the seminaries.”

That’s what Fuller was attempting to do last year, when he and other faculty spoke out against Hall’s promotion to provost. Another one of them, Jim Orrick, was also terminated under the cover of COVID-19 budget cuts, Fuller said: The seminary “didn’t want to waste a crisis.”

Orrick was the only other member of the nine that were terminated that Fuller said he knew did not sign the NDA. Orrick told The Fix he was not presently granting interviews, but added “that may change.”

Thomas Ascol, a Florida-based Baptist pastor, organized a GoFundMe fundraiser to recoup the severance packages that Fuller and Orrick are forfeiting by refusing to sign the NDA, a total of $40,000. As of Sunday evening he has raised just over $15,000.

“They deserve to be provided with a proper severance. Since the seminary they have served for decades refuses to provide this unless they sign the NDA, I have taken it upon myself to raise money to help replace what is being withheld from them,” Ascol wrote on the crowdfunding site.

Ascol returned an initial email from The Fix requesting an interview last week, but a subsequent email was left unanswered.