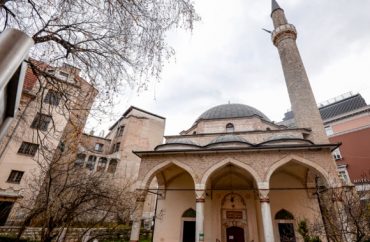 Students enrolled in a world religions course this semester at Texas Christian University must attend a mosque service as part of the class.

The field trip was scheduled to take place on Good Friday – one of the most holy days for Christians – observed as the day Jesus Christ was crucified.

“Every student is expected to attend this service,” states the syllabus, a copy of which was obtained by The College Fix. “This visit is part of your participation in class. Many other students from our department will join us. It is a religious experience visit. No student is required to participate in mosque’s service during our visit.”

Reached for comment, a campus spokesperson said the field trip’s date was assigned in error, that the university is closed on Good Friday, and the professor is working to reschedule the mosque visit.

“Texas Christian University is actually closed on Good Friday,” spokeswoman Holly Ellman told The College Fix in an email. “The date on the syllabus was inaccurate, which the professor is aware of and is modifying. He will notify his students accordingly to ensure that they have accurate, up-to-date information about the course.”

Asked for further clarification on the field trip, and the course and its content, Ellman referred to the class’ one-sentence online description.

Spring semester launched in mid-January at the private university, located in Fort Worth. The course, “Understanding Diverse Faith Communities,” is taught by Associate Professor of Islamic and Religious Studies Yushau Sodiq, whose faculty page states he earned his bachelor’s degree in Islamic Studies and master’s degree in Islamic law at University of Medina in Saudi Arabia, and his PhD in Islamic Studies from Temple University. He also taught at a university in Nigeria before his post at Texas Christian University, which he has held since 1992.

Sodiq did not respond to emails from The College Fix asking whether there is an alternative assignment for students who do not wish to observe the Islamic service, and well as for more general information on the course and its academic aims.

According to the syllabus, the intention of the mosque visit is to “understand the ritual and tradition of other religions in their own context.”

“You can also invite your friends to join in this visit,” the syllabus states. “… If you do not attend the mosque, you will not be able to do the quiz and as you know, there is not make-up for quizzes.”

The 90-minute visit will include an address by the “leader of the Muslim community” and an observation of the sunset prayer, it adds.

One option for extra credit in the class is called “Being Muslim for a Day,” in which students can dress as a Muslim or tell their family they’ve become Muslim and document the reactions.

The syllabus was provided to The College Fix by Pamela Geller, who obtained it from a campus source.

Geller is president of the American Freedom Defense Initiative, a nonprofit “dedicated to freedom of speech, freedom of conscience, individual rights and equality for all before the law.” Geller is known for, among other things, her activism against the encroachment of Sharia Law in the United States and her defiant stance against Islam’s strict and unconstitutional religious tenets, such as the law that the prophet Mohammad must not be drawn.

In a statement to The Fix, Geller expressed concern about the course at Texas Christian University:

“Sodiq’s syllabus for his ‘Understanding Diverse Faith Communities’ states that the course is meant ‘to enable our students comprehend the meanings and nature of world religions’ … Yet while the class discusses Islam, Judaism, African traditional religions, and Buddhism (apparently Sodiq assumes that students at Texas Christian University know all they need to know about Christianity already), Sodiq’s syllabus plans for five sessions on Islam, plus two more on The Kite Runner, a novel about Muslims in Afghanistan, and another for the mosque visit, for a total of eight on Islam and related themes,” Geller stated. “Meanwhile, only four class sessions are planned on Buddhism, three on Judaism, and two on African traditional religions.”

Geller also takes issue with the mosque trip: “Sodiq implies that the visit has a proselytizing intent as he writes: ‘You can also invite your friends to join in this visit’ – and ominously, ‘If you do not attend the mosque, you will not be able to do the quiz and as you know, there is not make-up for quizzes.”

“The syllabus does not explain why there is no visit to a synagogue, church, Buddhist temple, or any other house of worship – only to a mosque,” Geller told The Fix. “Sodiq also requires that students complete a journal entry on ‘Islamophobia.’ He asks for no journal entry on anti-Semitism or prejudice or hatred against any other group.”

“What is most disturbing about all this is the threat that lies behind it,” she added. “The people who passed this information on to me refused to be identified because they were certain there would be reprisals if their identities were known. Just as disturbing as that is the fact that in contemporary American academia, Yushau Sodiq’s university class of thinly veiled Islamic proselytizing isn’t unusual at all. It’s all too common.”