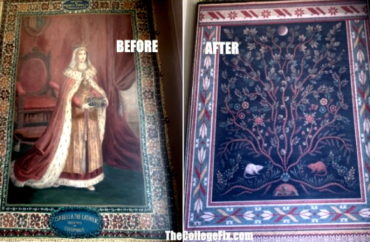 In addition to Columbus, Queen Isabella, venerated as a Servant of God in the Catholic Church, was covered up with a tapestry depicting a turtle and two rats

The University of Notre Dame administration has now covered the school’s 12 murals depicting the life of Christopher Columbus, which generated protests and petitions from Native American groups on campus.

The tapestries show turtles, rabbits, foxes, rats, bears, eagles and fish, as well as a variety of plant life. The Native American borders consist of both “natural and geometric motifs of the Pokagon Band,” according to the university. 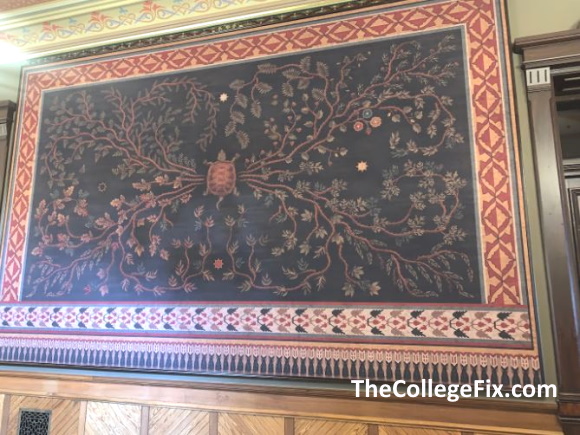 In some places, the edges of the original Columbus murals can still be seen. They were commissioned in 1884 by the founder of Notre Dame, Rev. Edward Sorin, and painted by Vatican artist Luigi Gregori. The murals depict Columbus as both a Catholic and American hero, and were meant to inspire patriotism in the immigrant Catholic community that populated Notre Dame.

In 2017, more than 300 students, employees and alumni signed a letter imploring university President Father John Jenkins to remove the murals, calling them a “highly problematic vision of Western triumphalism, Catholic militarism and an overly romantic notion of American expansion.” Thirty-three of the signatories identified themselves as Native American.

“The Native persons are depicted as stereotypes, their destruction is gilded over and their slavery is celebrated,” the students wrote of the murals. 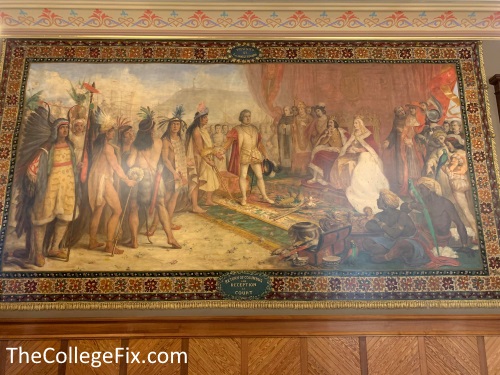 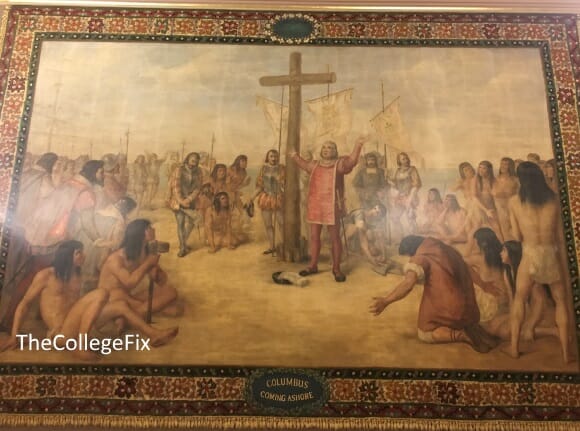 Young Americans for Freedom led an effort to keep the murals uncovered, and invited Daily Wire commentator Michael Knowles to campus to criticize Jenkins’ decision to cover the paintings.

“The action itself of taking beautiful, priceless murals by the Vatican portraitist at the entrance to a university in the United States and covering them up is a cowardly decision,” said Knowles in February 2019. “It is anti-intellectual. It undercuts the entire spirit of education, and it is profoundly wrong and cowardly.”

“According to Fr. Jenkins, art and history are simply too much to bear for the fragile minds of this university,” Knowles said. 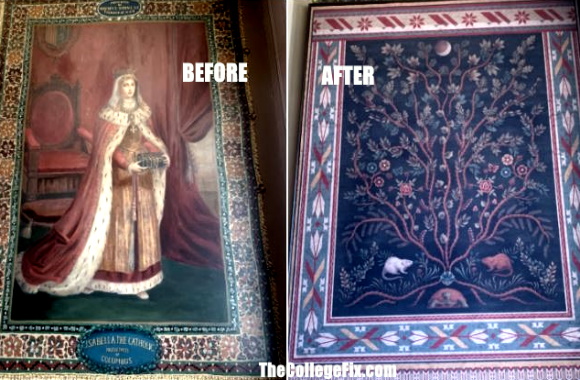 One of Gregori’s murals was a portrait of Queen Isabella I of Castille, who is venerated as a Servant of God in the Catholic Church. This status in the Church, however, did not spare Queen Isabella from being covered up with a tapestry depicting a turtle and two rats.

One reason Father Jenkins gave for covering the murals was that they stood in the hallway where the undergraduate admissions office is located, and could therefore offend interested students and families. The university has now announced, however, that the admissions office will be relocated to another building on campus.

The murals will be preserved underneath the tapestries and will be displayed “on various occasions,” Fr. Jenkins said in an email to Notre Dame students. A permanent exhibition is planned to show “high-quality reproductions of the images” alongside a historical explanation.

Following the announcement that the murals would be covered, some Native Americans on campus have continued to decry Notre Dame for actions against Native peoples.

Jefferson Ballew IV, the indigenous culture awareness and inclusion advocate for the Potawatomi Bear Clan, said at a lecture at Notre Dame following the announcement: “Every day I am reminded by that golden dome of the blood that was spilled here from my family… When this institution was created, it was created on the backs and the blood of my family directly.”