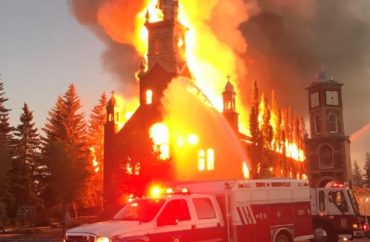 An essay in the University of Michigan campus paper said that the arson of Catholic churches in Canada this summer helped the writer gain “a new understanding of [her] religious identity.”

In response to the discovery of unmarked graves at some residential schools in Canada, arsonists began to set fire to Catholic churches. The arson won approval from Canadian civil liberties activist Harsha Walia who encouraged Canadians to “Burn it all down,” in reference to churches.

Vandalizing and arson helped Mary Rolfes, a recent grad, understand her disdain for Catholicism and her identification as an agnostic.

“While vandalism may not have been the most productive response,” Rolfes said in her October 5 opinion piece in the Michigan Daily, “the burnings demonstrate the visceral anger and hurt that the Catholic Church created through its role in the residential schools.”

“When the Church resists taking full accountability or working cooperatively with reconciliation efforts,” Rolfes said, “property destruction directed at a destructive organization may feel like the only outlet.”

The destruction of churches should be see as a demonstration of the anger that Indigenous people felt, Rolfes said. “[T]he destructive protests demonstrated that the discoveries of unmarked graves created anger, and perhaps felt personal, even to non-Indigenous people.”

She tries to defect from the Catholic Church

Rolfes, who is clearly hurting and needs prayer, said that the violence against Catholic churches helped her understand her own rejection of the faith. Rolfes, you see, has been baptized Catholic.

“As I developed my own perspective on the world, I found I disagreed with the Church’s stances on same-sex marriage, premarital sex, birth control and abortion,” Rolfes said. “On a more base level, I no longer believed in God — certainly not the Christian ‘God,’ a transcendent and immanent creator,” she wrote, as if there is more than one God, which there is not.

The violence and the alleged controversy of the graves led her to try to find out how she could complete her apostasy — only to discover that she couldn’t.

“As such, I wanted to completely disassociate myself from Catholicism. I wanted to somehow send a message to the Church — or at least as much as one person can when facing a massive international organization,” Rolfes said. “It is impossible to formally become an ex-Catholic,” she correctly notes.

“Because I was baptized into the Catholic Church, I am forever marked as a Catholic in the eyes of the Church, forever counted among their membership,” Rolfes said.

“I left Catholicism specifically because I do not believe in its teaching or laws, yet somehow I’ve found myself caught up on this rule,” Rolfes said.

And this, again to her credit, is a great point Rolfes makes. No one who is baptized Catholic can leave the faith, just as we cannot reject the truths of science.

For a baptized Catholic to say she has left the Church is the same as a person trying to say he will reject the law of gravity — you can say it all you want, it doesn’t change the truth.

“I’m certain my rejection of Catholicism has been made quite clear, and I’ve done so deliberately,” Rolfes concludes, in declaring her public rejection and plea for excommunication.

And with that, we can only pray for Rolfes’ return to the faith and for the veil of ignorance to be lifted from her.