I certainly am glad I’m not in the classroom these days, COVID notwithstanding. Extreme political polarization has made it so teachers must be as bland as possible so as not to upset anyone and preserve their employment.

Even given that, a heckler’s veto is enough to cause an uproar.

A Dallas, Texas a high school teacher is under investigation for an assignment which listed Kenosha, Wisconsin shooting suspect Kyle Rittenhouse as a choice for a hero of the “modern age.”

The sister of a boy in Ford’s class had a big problem with Rittenhouse being a choice.

“It didn’t sit right with him that a white supremacist murderer was on the same page as people he recognized to be important historical figures,” the sister said. “I don’t think that human rights are up for debate, I don’t think the sanctity of Black lives is up for debate, and that’s what this assignment is basically saying.”

According to The Washington Post, while Rittenhouse appears to lionize law enforcement, there’s no evidence he is a white supremacist. Not to mention, it’s certainly arguable that his actions were taken in self-defense. 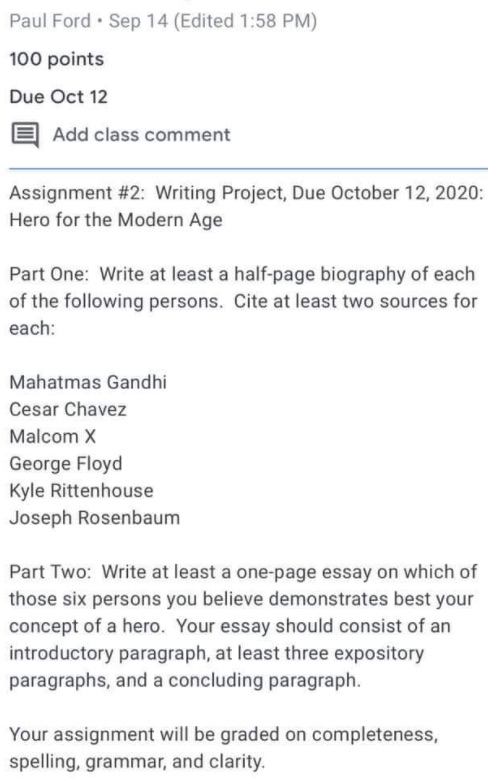 One could also question why Rosenbaum and Floyd are listed as well. The former raped five boys, according to a local report, while the latter had a record of drug and theft charges, including “push[ing] a pistol into [a woman’s] abdomen” during a robbery.

The three other “historical” figures have their own skeletons, too. If the “sanctity of Black lives” isn’t up for debate, consider Gandhi’s racial views. The “No Person is Illegal” crowd might be surprised to learn César Chávez opposed illegal immigration and encouraged his union members to patrol the US-Mexico border to prevent illegal crossings.

I understand what Mr. Ford was trying to do with his assignment, but he should have thought better of it knowing politics today. At the very least he should have cleared the lesson with his administrators. Heck, another student in the class got cheesed because no women were included on his list.

Worse still, a professor from Baylor said Ford’s classroom past should be investigated:

[T]he framing of the prompt was problematic, [Mia] Moody-Ramirez said; by including Rittenhouse’s name on a list of “modern-day” heroes, it signals to students that he is one.

“He’s not a hero in the traditional sense, so I don’t know how appropriate that is for an assignment for students,” Moody-Ramirez said. “And that’s what concerns me.” …

Aside from disciplining Ford, she said that the district should investigate whether he’s assigned similar homework in the past to see if there’s a pattern.

A Facebook post which includes the lesson led to “many” calling for Ford’s ouster, according to a report in the Dallas Observer. However, there were quite a few defending Ford in the post’s comments.

“I don’t see anything wrong with it. Especially seeing George Floyd on there,” wrote one commenter. “We are in mourning for his vicious death but with his previous background, he was no hero.

“This opens up commentary for an understanding of differences. We can’t expect to change anything if we are scared to allow an open conversation on such topics because alot [sic] of some people’s thinking patterns is lack of empathy because they don’t understand ALL sides.”