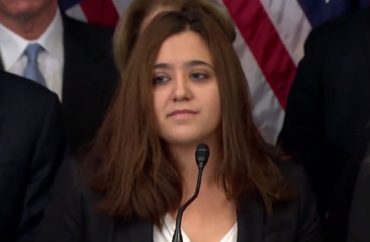 ‘There are powerful pressures to keep silent about potential hoaxers’

While America was still reeling from the Rolling Stone feature “A Rape on Campus,” one writer expressed skepticism of the protagonist’s fanciful factual claims: Robby Soave of Reason.

He wasn’t the only skeptic, but he gave permission to other respectable journalists to publicly note the “perplexing” details “on subsequent re-reads” of the feature by now-discredited writer Sabrina Rubin Erdely.

Now it’s time for respectable journalists to pay closer attention to the perplexing details in a much higher-profile activist’s claims about her two alleged rapes, thanks to the dogged work of another Reason writer.

Cathy Young paid close attention to claims and writings by Andrea Pino, who co-founded End Rape on Campus, that have been largely ignored by other journalists. They don’t definitively prove she was lying about being raped twice as a student at the University of North Carolina, but they are screaming out for more serious investigation of the sort that a well-resourced publication like The Washington Post can offer.

This is particularly the case because Pino is back in the news following the government’s resolution of a Title IX complaint she helped bring against UNC.

MORE: The next ‘Jackie’? Investigations poke holes in Pino’s story

Young discloses in Reason that she heard from a woman “who works closely with Title IX activists advocating for campus sexual assault survivors” and has “interacted personally with Pino” several times.

“Danielle” felt compelled to speak to Young after the latter’s article questioning the plausibility of Pino’s claims, telling the writer that “some of us … have been frustrated for years by [Pino’s] web of lies”:

“I noticed that her ‘story’ became more and more graphic each time she told it to the press,” Danielle wrote. “She also loved being ‘in the limelight’ so much more than other survivors. And then other students began to tell me discrepancies in her story, such as the fact that the date she says it happened was when the dorms were closed for a break, so she could not have returned to her dorm room. Several students shared that her story was a ‘mash-up’ of three other students’ stories.”

This woman believes that the story told by Pino, “one of the most visible spokeswomen for the movement against campus sexual assault,” is “most likely fake”:

Danielle believes there is a “conspiracy of silence” that shields Pino’s credibility problems. “Many people in the movement are aware,” she wrote, “as well as some in the press whom I’ve spoken with.” She says that “there are powerful pressures to keep silent about potential hoaxers, and this hurts the movement in the long run.”

The media’s refusal to scrutinize a named accuser who has benefited immensely from her claims of being a rape survivor shows that journalists are “still failing at the most basic fact-checking when covering claims of sexual assault—even when those claims clearly call for critical scrutiny,” Young writes:

Instead, the operating principle seems to be the title of Pino’s co-authored book on sexual assault survivors: We Believe You.

It’s not “rape culture” to insist that facts matter, and that if Andrea Pino is indeed spinning or exaggerating a tale of her own victimhood for her own fame, it’s rape victims who are hurt worst by it.