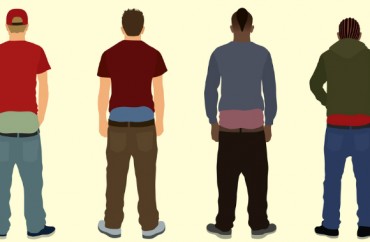 Henderson State University in Arkansas expects you to wear your pants all the way up.

A school and students at odds over a sign that once hung in the student center at Henderson State University. The sign reading “sagging pants” would not be tolerated upset many students on campus.

After only being up for two days, the sign has been taken down. Students told Channel 7 they believe the sign was targeting them, but administration says they’re just holding their students to a higher expectation. …

“The group that I’m representing was outraged by the sign,” [student Daisha] Haggans said. Those students wanting the sign taken down because they say “sagging pants” is culturally associated with African Americans.

“Its politically insensitive to certain groups. They felt like they were being targeted,” [student Kristin] Bell said.

The school, which has no formal dress code, told Inside Higher Ed the sign had nothing to do with cultural insensitivity, but rather the faculty “in particular had experienced an increase in inappropriate classroom behaviors that were disturbing the learning environment.”

It should be noted, as KATV does, that Arkansas banned sagging pants in elementary and secondary schools in 2011, and that bill was sponsored by a black legislator. However, as Will Creeley of the Foundation for Individual Rights in Education tells Inside Higher Ed:

“Absent some kind of showing that sagging pants could somehow disrupt the educational environment in a clearly, truly unreasonable way, which is hard to fathom, this is a blatant overreach by the administration,” Creeley said. …

The bans on profanity and rude behavior were also concerning, Creeley noted, adding that the university was “really going for the trifecta.”

Read the KATV and Inside Higher Ed reports.