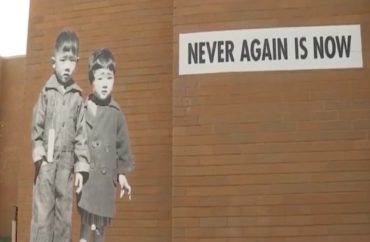 A college administrator who censored an on-campus mural last month reportedly did so out of concerns that the art installation, which named a member of a prominent local family as participating in human-rights abuses, could open up “liability” concerns for the school.

Earlier this year, Washington artist Erin Shigaki created a mural for the Seattle-area Bellevue College titled “Never Again is Now,” a wall-length portrait depicting two Japanese children who had been incarcerated in a local internment camp during World War II.

The text under the mural read, in part: “After decades of anti-Japanese agitation, led by Eastside businessman Miller Freeman and others, the mass incarceration of Japanese Americans included the 60 families (300 individuals) who farmed Bellevue.”

In a bizarre turn of events, the school’s Vice President of Institutional Advancement Gayle Barge later whited out that portion of the installation, a decision that was made with no explanation and for which the school later apologized. The text was eventually, albeit clumsily, restored to the artwork.

The reason for that censorship was not immediately clear. Reached for comment earlier this month, Shigaki told The College Fix that Barge had done the vandalism out of concern for the school’s finances.

“There was never any reason given for the whitewashing of my mural except for Dr. Barge’s initial public-facing answer that she wanted to protect the name and reputation of a donor,” she said.

Shigaki said she read of Barge’s excuse in a Seattle Times article. The Fix could not find any Times article that cited such an excuse, and Shigaki did not provide one. Reached for comment, Bellevue College spokeswoman Kela Hall gave The Fix a different though slightly cryptic explanation.

“Based on Dr. Barge’s responses to the Board and the community, our understanding is that Dr. Barge stated her decision to white out the text on the ‘Never Again is Now’ art installation was ‘poorly thought out’ and ‘impulsive,’ but was not done with discriminatory intent,” Hall said.

“She indicated she acted based on concerns from an ‘overall accuracy and liability perspective’ as well as her belief that the College had not approved the posting of the artist’s statement as part of the mural project,” she added.

Presented with this response, Shigaki told The Fix that “several people at Bellevue College had approved the posting and the information cited on the art panel is historically accurate.”

The school announced in early March, several days after the censorship took place, that both Barge and President Jerry Weber were resigning.

“The recent defacement of the ‘Never Again Is Now’ art installation along with the response to this deplorable act has deeply impacted students, staff and faculty,” Board of Trustees Chair Richard Fukutaki said last month.

“It has damaged the credibility of the college locally, regionally and nationally. But beyond that, it was just fundamentally wrong, and we needed to act decisively.”

Following the departure of the administrators, the school appointed Kristin Jones, previously the school’s provost, as the acting president. Jones told the university following the announcement that the school would strive to “create a culture we can be proud of, a culture of inclusion, of compassion, and of accountability.”

“We would again like to publicly apologize on behalf of the college to Seattle Artist Erin Shigaki and the many people negatively affected by the recent events at the college. We know that these weeks have been difficult. We know that you have been hurt. We promise that we will do a better job of listening and more  importantly–ACTING on what we’ve heard in order to honor the diversity of our community,” she said.

According to an official timeline, which the school provided to The Fix, Bellevue College hopes to select a permanent president by April 22.