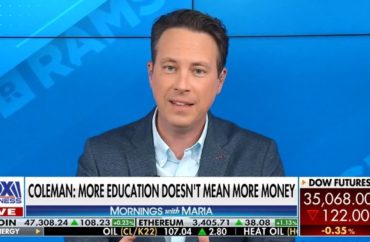 The percentage of job listings that require a degree has dropped

Employers have started to look at training on the job as a better measure of skills than a college degree, according to one career expert.

Ken Coleman (pictured), a career coach and podcaster with Ramsey Solutions, told The College Fix recently that he expects the number of job listings that require a college degree to continue to decline.

“On-the-job training is replacing the college diploma,” Coleman told The Fix through a spokesperson. “To put it simply, the ‘knowledge’ that comes with a degree isn’t relevant to the job.”

The Fix asked Coleman to explain why he believed degrees were becoming less relevant, a point he made during a recent episode of his show.

“62 percent of U.S. adults over the age of 25 do not have a bachelor’s degree,” Coleman said on his show. He said even he thought the number would be lower.

He said on his show that in 2017, 51 percent of job listings required at least a 4-year degree. However, by 2021, that number declined to 44 percent, a 7 percent drop. The numbers come from a report by the Burning Glass Institute, a labor research firm.

“These numbers are going to continue to shift,” Coleman said on his show. He said in five years he could see the number of jobs that require a college degree drop to 25 percent.

Other career fields could eventually require fewer years of education. He gave the example of the possibility that someone will create a shorter medical or law degree. “It will happen,” he said.

“They are going to shrink what has been traditionally required in an undergrad degree, is going to be shrunk down,” Coleman said on his show.

He told The Fix there is not an advantage between students who go to a traditional college for the long-term versus those who avoid higher education. “They are actually putting themselves behind. Financially and professionally.”

“Get out there and get after it. Experience will always trump education,” he told The Fix.

He said technology is an area that is likely to experience a significant drop in college degree requirements. “Technology is no longer just a field, it’s everywhere. This is the perfect example of on-the-job training and gaining knowledge from experiences.”

The Burning Glass report supports this claim. For example, only 29 percent of Intel’s information technology positions require a college degree. Apple and Google have reduced their job listings that mandate a college degree by 17 percent and 18 percent respectively.

Coleman said he wants high schoolers and parents to ask if “college [is] the only way, or the best way” when they make a decision about the next steps in their life.