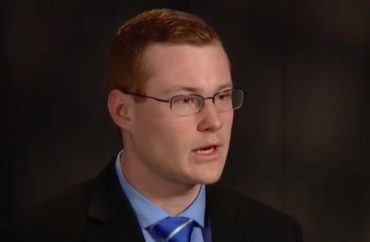 A nineteen-year-old college freshman is squaring off against a Chicago alderman, running for the spot against what the student calls a “dictatorship” that has allegedly harassed local residents.

Questionable circumstances have arisen in the course of the campaign, meanwhile, with what appears to be a fraudulent effort to have the student’s name removed from the ballot.

David Krupa, a student at DePaul University, is running against incumbent Marty Quinn for alderman in Chicago’s 13th ward, in what Chicago Tribune columnist John Kass called “the most powerful big-city Democratic ward organization in the country,” run by “Boss” Michael Madigan.

Krupa began his campaign for alderman by filing a petition to put his name onto the ballot. At least 473 signatures of residents of the ward are needed on a candidate’s petition in order to be included on the ballot. Krupa ended up collecting just over 1,700 signatures.  (Quinn, who is running for his third term as alderman, also filed a petition to get his own name on the ballot.)

As Kass reported in The Tribune, following Krupa’s successful petition efforts, “an organized crew…walked door to door in the 13th Ward and turned in 2,796 affidavits from residents asking that their signatures for Krupa be revoked,” or roughly 1,100 more signatures than Krupa originally acquired.

The Tribune further reported that, of the nearly 2,800 affidavits calling for signature revocation, there were “only 187 matches, meaning only 187 people who signed [Krupa’s] petitions filed revocations.” Marty Quinn eventually dropped the effort to have Krupa struck from the ballot.

“I knew I was going up against corruption,” Krupa told The College Fix in a phone interview. Krupa said that his opponent’s advocates used intimidation tactics on residents of the 13th Ward in order to coerce them into signing the affidavits. Krupa referred to these opponents as “30 guys who were trying to get me off the ballot.”

“They came to neighbors’ doors three to four times a day for a straight week trying to harass [the residents] to get them to sign something that would get their name off my petition,” Krupa explained.

“The reason they tried to get me off the ballot was because they knew they wouldn’t get re-elected if people had another option,” Krupa added.

Krupa said that canvassers told the people who signed both Krupa’s and Quinn’s petitions that they “broke the law” and in order to avoid arrest they needed to sign the affidavit.

“It’s that much of a dictatorship over here,” Krupa said.

Quinn’s office did not reply to repeated requests for comment from The College Fix. But Krupa said that residents of the 13th Ward are victims of political favoritism.

“There’s a disproportionate amount of city services going to different areas in our ward. The majority of services are going to [people who support Madigan]. The minority communities in the 13rd Ward are being neglected. They’re not receiving city services in the ward that they pay. We all pay taxes. It’s not fair they get less city services,” Krupa told The Fix.

Krupa says he is running for alderman because he is “voicing the concerns of the people.” According to his website, Krupa advocates increased crime prevention in order to “ensure the people’s property, happiness, and well-being.” He also favors addressing the “pension crisis” and fighting the rise of property taxes.

“The pension crisis is a big deal,” Krupa told The Fix. “I’ve known about these problems for a long time.”

According to Kass, when asked by reporters about the suspicious activity regarding the signatures, Quinn “ran off, refusing to answer questions about the mysterious affidavits.”

In late December, the local Chicago news station WGN 9 reported that the FBI was investigating the issue of the alleged fraudulent affidavits.