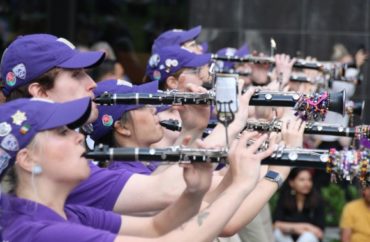 The music department of Meredith College has promised to tackle racism problems, according to a news release from the university.

The private college in North Carolina has pledged to change the way it picks music, highlight a diverse set of musicians and overall create a more inclusive curriculum, according to the September 25 statement.

“Having been aware of systemic racism in housing, banking, education, etc., I have to admit that I was not truly aware of how that systemic racism was built into our curriculum in music and music education,” Jeanie Wozencrat-Ornellas, the music department head, said in the news release.

She stated she plans a number of changes as part of the music department’s contribution to the university’s overall anti-racism plans.

It includes a curriculum revision that will promote the “inclusion of marginalized musicians” including an addition of the “contributions of BIPOC, women, and LGBTQ musicians.” BIPOC refers to black, indigenous and people of color.

“European tonal scales/intervals will be compared with other cultural tonal systems in the theory classes, and be further investigated in the global music course, including harmonies, tones, rhythms, and notation not used in western music,” the university noted.

Improperly labeled songs will also be removed from the playlist.

MORE: DePaul U. music students want dean ousted because he was ‘insensitive’

Music department faculty will take “definitive steps … to purge ensemble libraries of inappropriate selections,” including “‘Chinese folk songs’ that include neither Chinese poetry nor harmonies, and are written by white composers.”

The choral director at the university also criticized her own field for not being “proactive” enough in “anti-racism.”

Shannon Gravelle, the choral director for Meredith, stated in a September 25 interview posted by the university that the choral field must do more to combat racism.

The Music Education field tends to be more proactive in anti-racism discussions and curriculum design than the choral field, although there are some amazing leaders in the choral field. In addition, these two fields sometimes overlap. All this to say: anti-racism work is moving at a different pace in different areas of music.

In June, campus officials released a series of four action steps it planned as part of its “Anti Racism Initiative.”

It included providing “anti-racism and microaggression training for faculty and staff” and ensuring its policies are not “unconsciously contributing to systemic racism.”

The university also plans to launch a survey on racial issues in October and join the University of Virginia’s “Universities Studying Slavery” initiative.